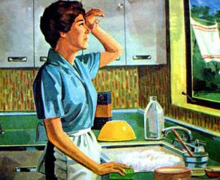 By Marty Manor Mullins | Many women in eastern Europe are seeking “the good life” in a way that would startle many Western feminists. (Editor’s note:  due to the length of this article, the first half appears today and the second half will be blogged next time…)

Many East European1 women appear to be bucking today’s feminist trends, preserving a feminism that the Western world long ago abandoned. This phenomenon, strange to our Western sensibilities, could be described as “reverse feminism.” While the region possesses trademarks of a “liberated” society in which women are not restricted to the home and often work full-time, East European women themselves celebrate the archetype of woman as mother and homemaker. Indeed, many women from the area reflect the belief that any woman worth her salt should be able to cook at least four soups from scratch, clean all the windows in the flat before Easter and remain thin until approximately age 60. What makes this so unbelievable to Western observers is that East European women readily promote these standards, the very same norms that Western women fiercely fought against after the 1950s.

Despite the fact that changing social norms have coupled with Western notions of female liberation to cause some women in the region, especially young women, to reject their mothers’ dedication to conventional values, what I’ve witnessed reinforced the concept of reverse feminism. As an American teaching English in an eastern Slovak high school for four years, I was repeatedly startled by the seemingly contradictory idea of working women embracing traditional roles of wife, mother, cook, housekeeper, and gardener. 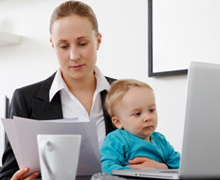 Elizabeth C. Dunn, Associate Professor of Geography at the University of Colorado at Boulder, examines this perplexing angle on feminism in her study, Privatizing Poland: Baby Food, Big Business, and the Remaking of Labor.2 The monograph primarily investigates the effects of shifting management techniques on the labor force during the turbulent transition after 1989 from command economy and authoritarian state to capitalist market and democratic state. In order to get an accurate read on privatization’s impact on workers’ positions in post-Communist Polish society, Dunn took a job on the factory floor of the formerly state-owned, Polish baby food giant “Alima,” purchased in 1992 by the Gerber Products Company of Fremont, Michigan. Dunn devotes one particular chapter to a study of her blue-collar female colleagues’ perpetuation of domesticated archetypes of women. For example, when responding to a Gerber company evaluation, the women “deliberately used metaphors that not only cast them in subordinate roles but also portrayed that subordination as a positive thing.”3

The present status of women in East European society reflects a complex heritage. Communism viewed women as equal contributors toward a productive society and, as such, ironically accomplished more towards boosting female employment numbers than any democratic government could have. The Communist regime required that all eligible females be employed. Dunn cites a study noting that by 1988 almost 80 percent of working-age women in Poland had jobs and women comprised 45.5 percent of the entire workforce.4 While post-Communist East European governments no longer require full employment and unemployment remains a significant problem, an overwhelming majority of families remain two-income households, largely out of economic necessity. High unemployment percentages in the region have produced a sense of economic uncertainty which, when coupled with low wages and high prices, results in many couples concluding that they need both parents’ incomes. Thus, only rare cases of stay-at-home moms exist. Social norms and financial considerations often necessitate that all women who are of age and not on maternity leave work until their early to mid-sixties.5 In this respect, to the sensibilities of many Western feminists, Eastern Europe shines as a model of progressive feminist ideals.6

Except for the fact that many East European women themselves celebrate a femininity that would make Western feminists cringe.

The women in Dunn’s study repeatedly referred to their innate identity as mothers. Dunn discerns that perhaps this extends from the veneration of Mary as “Mother of God,” a common practice in the largely Catholic country of Poland.7 The Polish women who worked in the Gerber baby food factory described their identities as being those who bear children, those who feed children and husband, and those who create a home environment. As Dunn notes, “In Polish culture and tradition, feeding children is the quintessential act of motherhood—and motherhood is the essence of traditional Polish femininity.”8 In neighboring Slovakia, pregnancy secures a three-year paid maternity leave for public school teachers.9 Compared to the standard six-week to three-month maternity leaves in America, such an extended paid leave underscores the importance East European society places on motherhood. This emphasis on bearing children is warranted according to the alarming statistics of plummeting birth rates in contemporary Western and even Eastern Europe.

One might wonder, in light of declining birth rates, if the subjects in Dunn’s study are characteristic of all East European women. Moreover, what influences regional women’s attitudes and decisions toward working outside the home, bearing children and homemaking? In fact, these women’s outlooks are not uniform and several factors influence their formation—namely religion, social institutions, age, and location.

First, the degree to which religion informs a country’s culture shapes the extent to which traditionally defined gender roles are observed. In predominantly Roman Catholic countries such as Poland and Slovakia, the Church still holds sway over many individual’s views and choices. However, in countries like the Czech Republic, where few affiliate with religion at all, viewpoints differ.

Professor of sociology at the University of Zagreb (Croatia) Aleksandar Stulhofer and Columbia University research scientist and social psychologist Theo Sandfort note three influences determining the region’s sexuality and gender roles in their study, Sexuality and Gender in Postcommunist Eastern Europe and Russia.10 The first on their list is religion. They affirm that the power of religion was particularly pronounced in Eastern Europe in the 1990s when the Church became independent from state control: “[R]ising religiosity and the growing social impact and influence of the Church as theultimate moral authority strengthened conservative viewpoints and policy initiatives, especially in discussions on abortion, sex education, homosexuality, gender roles, and family violence.”11 However, in recent years, religious observance has declined in Eastern Europe, particularly among younger generations.

Similarly, Jacqui True, political science professor at Australia’s Monash University, refers to the lack of social institutions in post-Communist Czech Republic as affecting women’s choices in her monograph, Gender, Globalization, and Postsocialism: The Czech Republic After Communism.13 She points out that as the state no longer provides free childcare and other public services, women are waiting to become mothers or being content not to have children at all. True states, “Contrary to government and societal expectations, young Czech women have chosen to keep their jobs and pursue new career opportunities in the market system rather than fulfill traditional mothering roles and ‘reproduce the nation.’”14

The second half of this article can be found here.

Are You a Feminist?

Is There Sex that is Not Good?