Is marriage even a good idea anymore?  This course examines the debate surrounding the choice between marriage and cohabitation.  Some in the modern debate argue that this discussion is a new one.  Therefore they want to exclude past theories and data from the current discussion.  But this is not a new conversation.  So what are the arguments for cohabitation over marriage?  And why do some still hold that marriage is superior to “living together”?  In many ways, the burden of the debate is to define what constitutes “marriage” before we can compare it to the idea of simply cohabiting.  One great and fairly short passage from author Wendell Berry can start that discussion:

“Marriage is the mutual promise of a man and a woman to live together, to love and help each other, in mutual fidelity, until death. It is understood that these definitions cannot be altered to suit convenience or circumstance, anymore than we can call a rabbit a squirrel because we preferred to see a squirrel. Poetry of the traditionally formed sort, for instance, does not propose that it’s difficulties should be solved by skipping or forcing a rhyme or by mutilating syntax or by writing prose. Marriage does not invite one to solve one’s quarrel with one’s wife by marrying a more compliant woman. Certain limits, in short, are prescribed — imposed before the beginning.” – Wendell Berry, “On Poetry and Marriage: The Use of Old Forms”

Given this definition as a starting point, is this kind of mutual promise in peril?  Are more people today avoiding this commitment and simply living together?  Consider the evidence from the following article:

So say USA Today and the Associated Press, based on a new report from the Pew Research Center.

But a closer look at this report reveals both good and bad news about marriage and family in the United States. The report is a compilation of family formation trends as well as attitudes of American adults toward marriage, family and parenting. 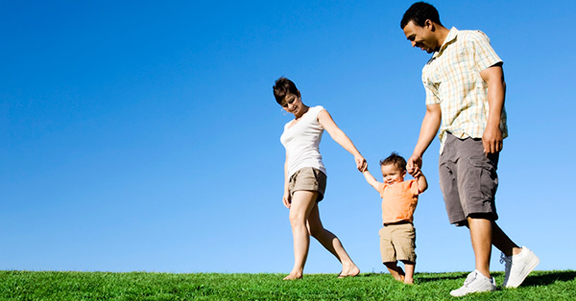 The bottom line is not new: Americans are strongly pro-marriage, pro-family and pro-parenting in their attitudes and deepest desires for their own lives, but not so much in their general views and practices.

The “marriage is obsolete” claim

The Pew report admits this claim is not quite as it seems. The report cites the 2006 World Values Survey, which found only 13 per cent of Americans agreed that “marriage is an outdated institution.”1

It’s true that Pew’s new data shows 39 per cent of adults agree “marriage is becoming obsolete.” But this is in response to a general question about marriage as a social concept.

When Pew asked people about their own feelings regarding their present or future marital and family prospects, a different picture emerged – one that shows the majority of Americans still have a deep desire for marriage and family in their own lives.

Sixty per cent of American adults who are not yet married or are currently living with someone express a desire to marry.

Only 13 per cent of these express no interest in marrying.

Only 16 per cent of cohabiters, presumably less positive on marriage, express no interest in it.

In fact, Pew’s data shows there are more people who want to marry today than in 2007.2

Most promising, Pew reports that “The youngest generation has the strongest desire to marry . . . [with] 69 per cent [of] unmarried 18- to 29-year-olds say[ing] that they want to get married.”3

Sixty-nine per cent of current cohabiters express the desire and belief they will marry one day.

Tellingly, 64 per cent of current and former cohabiters see their cohabiting as a “step toward marriage” rather than a replacement of marriage.4

When asked “How important is your family to you at this time?”5

Only 16 per cent of Americans don’t want to have children, while 62 per cent do want them.6 Sixty-one per cent of Americans tend to agree a child needs a home with both a mother and father to grow up happily, down from 69 per cent in February 2007, but similar to the rate in 1982.7 Sixty-nine per cent of adults believe it is a “bad thing for society” for more single women to be having babies without a man to help raise them.8

In addition, respondents were asked what makes a man a good husband or partner, and a woman a good wife or partner.9 The results are shown in figure 1 and figure 2, respectively: 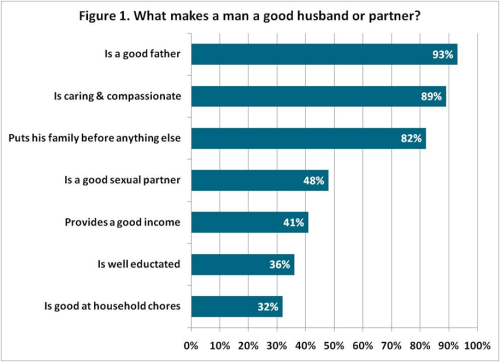 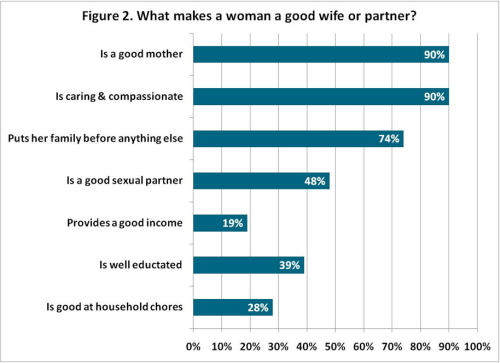 Married people are most likely to say they are “very satisfied with family life” (84 per cent), followed by the widowed (78 per cent), those living with a partner (71 per cent), the single (66 per cent) and lastly, the divorced and separated (50 per cent).11

The bad news about marriage

There is also plenty of bad news about marriage in the Pew report. The rates of marriage and children living with married parents continue to decline, while the rates of cohabitation and out-of-wedlock births continue to climb dramatically.

Forty-six per cent of Americans believe it doesn’t make much difference whether more couples live together outside marriage, while 43 per cent believe it is bad for society.

It’s the large ratio of “doesn’t really matter” respondents to these questions that is most troubling. This represents the family relativists, and their numbers are significant. Nevertheless, regardless of these negative findings, this Pew report is a high-quality, informative piece of research. It is worth studying by anyone who wants to better understand our culture’s current perceptions of marriage and family. 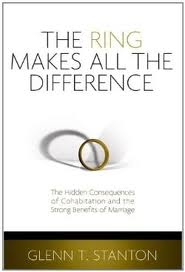 The Ring Makes All the Difference: The Hidden Consequences of Cohabitation and t Glenn T. Stanton

For or Against
the Hook-up Culture? Should Marriage
Be Redefined? Is the Traditional Family
Worth Saving?