What Was the Founding Father’s Mindset?

America’s Revolutionary Mind: A Moral History of the American Revolution and the Declaration that Defined It, C. Bradley Thompson, Encounter Books, 447 pages

Imagine an academic world in which historians treated the American Founders not as greedy slaveholders or grasping aristocrats, but as deeply moral agents, endowed with free will.

Bradley Thompson’s latest work, America’s Revolutionary Mind, does exactly this. It bleeds ideas as well as enthusiasm. Indeed, a proper review of this work would be, of necessity, book length, as Thompson’s work both demands and deserves. Even the very structure of the book reflects this.  Not only does Thompson give us eleven carefully argued and crafted chapters, but he also wraps these chapters in a preface, an introduction, a conclusion, and an epilogue. And, as the author reminds us, this is only volume one of two volumes. The second, forthcoming, is America’s Constitutional Mind. As the author admits, this reflects—whether by intention or coincidence remains unclear—Abraham Lincoln’s understanding of the Declaration of Independence as the philosophical touchstone, fountainhead, and source of the Constitution as well as of the future history of America. As Lincoln put it, the Constitution is the frame of silver around an apple of gold. 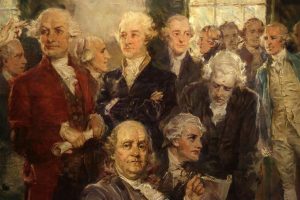 Yet, it’s not just Lincoln. Thompson finds Thomas Jefferson, not surprisingly, to be the most important interpreter of his own work, especially in his famous May 1825 letter to Richard Henry Lee:

This was the object of the Declaration of Independence. Not to find out new principles, or new arguments, never before thought of, not merely to say things which had never been said before; but to place before mankind the common sense of the subject, in terms so plain and firm as to command their assent, and to justify ourselves in the independent stand we are compelled to take. Neither aiming at originality of principle or sentiment, nor yet copied from any particular and previous writing, it was intended to be an expression of the American mind, and to give to that expression the proper tone and spirit called for by the occasion. All its authority rests then on the harmonizing sentiments of the day, whether expressed in conversation, in letters, printed essays, or in elementary books of public right, as Aristotle, Cicero, Locke, Sidney, etc.

Thompson claims this is the single most important passage written about the Declaration. He focuses especially on its proclamation of objective moral standards, of fixed ideas, and the necessity of defending it against all tyrants—who would not merely govern poorly, but, according to the Natural Law, wrongly and inhumanely.

From the beginning of America’s Revolutionary Mind, Thompson admits his ambition to write not just another history of the Declaration or of the Founding, but to write an entirely new interpretation of the period, building upon and fulfilling what Bernard Bailyn and Gordon Wood began in the second half of the 1960s with their respective masterpieces, The Ideological Origins of the American Revolution and The Creation of the American Republic. To be sure, Thompson has succeeded in this lofty goal, and, if nothing else, this makes this extraordinary book even more extraordinary.

The historiography of the American founding period is a fascinating and circuitous one. In the immediate or almost immediate aftermath of the Revolution, David Ramsey and Mercy Otis Warren wrote histories of the American Revolution, and James Wilson offered two semesters’ worth of lectures at what is now the University of Pennsylvania in the 1790 and 1791 academic year. One might properly label these various attempts at definition as Whiggish and Livyian.  After all, as Livy wrote of the decline of the Rome from its republic to its empire: “I would then have him trace the process of our moral decline, to watch, first, the sinking of the foundations of morality as the old teaching was allowed to lapse, then the rapidly increasing disintegration, then the final collapse of the whole edifice.” When trying to identify the source of the collapse, Livy lamented, “Of late years wealth has made us greedy, and self indulgence has brought us, through every form of sensual excess, to be, if I may so put it, in love with death.”

Compare Livy’s words, written in the time of Augustus, to Mercy Otis Warren’s in 1805. America, “has in great measure lost her simplicity of manners, and those ideas of mediocrity which are generally the parent of content; the Americans are already in too many instances hankering after the sudden accumulation of wealth, and the proud distinctions of fortune and title. They have too far lost that general sense of moral obligation, formerly felt by all classes in America.”

Further, Warren wished, “If this should ever become the deplorable situation of the United States, let some unborn historian in a far distant day, detail the lapse, and hold up the contrast between a simple, virtuous, and free people, and a degenerate, servile race of beings, corrupted by wealth, effeminated by luxury, impoverished by licentiousness, and become the automatons of intoxicated ambition.” Thompson might very well be Warren’s prophesied historian.

The Whig and Livyian school of thought reigned throughout almost all of the nineteenth-century—including Lincoln’s understanding—but the progressives of the 1890s through the 1930s fundamentally reshaped the historical understanding of the founding, employing utilitarianism, Darwinianism, and relativism to the founding. Not surprisingly, in the minds of the progressives—who lacked any moral imagination—the founders were all money-grubbers using the levers of government for their own self-aggrandizement.

Opposition to the progressives began to grow in the late 1940s through the 1960s with the rise of the “Republican/Whig” school of thought, so characterized by Russell Kirk, Caroline Robbins, Trevor Colbourn, and Douglas Adair. Harkening back to Ramsey and Warren, these new scholars believed that the founders were primarily motivated by the ideas of the Greco-Roman world as understood through the English common law experience. Colbourn expressed this well, when he wrote: “The Revolutionary leaders were men of substance—propertied, educated.  They read. And what they read made it easier for them to become rebels because they did not see rebels when they looked in the mirror.” Instead, the founders “saw transplanted Englishmen with the rights of expatriated men. They were determined to fight for inherited historic rights and liberties.”

In the 1960s, after examining thousands upon thousands of American revolutionary-era pamphlets, Bailyn and Wood created the “Neo-whig” school, following the work of Robbins and others, but giving much more power—almost a determinism—to the importance of individual ideas.

As noted above, Thompson sees his own work as a fulfillment and filling out of the work of his beloved mentors, Bailyn and Wood. As such, Thompson’s book is, properly and justly, filled with attempts to understand free will. Where Bailyn and Wood gave too much credence to the power of ideas (again, as somewhat determinisms and deterministic), Thompson wrestles with the much more difficult problem of individual free will. After all, imagine a world in which every single person—past, present, and future—is a moral agent. The world gets very, very complicated, very, very quickly.

Thompson fleshes out his ideas of moral agency early in the book, and he’s worth quoting at length on this, as it’s the most important contribution (of many serious and critical contributions) of the work.

The new moral history begins with certain assumptions about human nature; first, that individuals are the primary unit of moral value; second, that human nature is knowable and sometimes predictable; third, that man’s faculty of reason can know cause-and-effect relationships in nature and human nature; fourth, that individuals are confronted every day with choices, and that they have the free will to choose between alternatives; fifth, that freely thinking (rationally and irrationally) and freely acting (morally and immorally) individuals are capable of making decisions and acting upon them; sixth, at purposive human agents cause events to happen; and finally, that human thought and action can have intended and unintended consequences. This view of human nature suggests that individuals are morally responsible for their decisions and actions and the consequences that follow therefrom. Thus the new moral history puts the thinking back into ideas, the judgment back into intentions, and the volition back into actions.

Phew. Amen. Phew again. Amen again. For probably every reader of The American Conservative, Thompson’s points—however beautifully and expertly articulated—might seem obvious. After all, these are points that Socrates, Cicero, Thomas Aquinas, Thomas More, and Friedrich Hayek all could have made. Yet, in the modern academy, so enamored with horrific ideas of determinism, Thompson is nothing if not revolutionary in his insistence on these things. Not only is Thompson gloriously correct, but again, it is worth noting, he has just complicated history, recognizing that history turns not on some predestined pivot, but on the moment-to-moment moral decisions every human being makes in every aspect of his life. Life is messy.

So, here we have it—the first major reinterpretation of the American founding in over half a century. And, America’s Revolutionary Mind is not merely path-breaking, it is a gorgeous work of art. Every sentence, every paragraph, every section, and every chapter rings with Thompson’s own eagerness to share these ideas and with his own moral conviction that these ideas matter.  After all, if the American founding is truly the founding of America (yes, the answer to this might seem obvious to you, fine reader of TAC, but it doesn’t to most academics), we must get the story right. Thompson is not only rigorous in his research and his argumentation; he is elevating and leavening in his pursuit of beauty in his very writing as well. Rarely does such an author come along. And, even more rarely, does such a comprehensive and inspiring book come along. America’s Revolutionary Mind deserves to be read by all Americans and all women and men of good will.

The Founders’ Moral Mind Was Revolutionary, And Free