The Minimum Wage Can Never Be High Enough 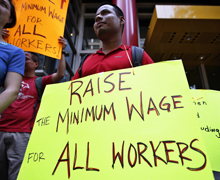 By Ike Brannon | The minimum wage is a facile non-solution for the complicated problem of poverty in America.

While waiting in line at my local grocery store in Washington, D.C., the other night, I eavesdropped on two thirty-something store employees discussing the $15 minimum wage that recently took effect in Seattle.

“It’s a start, but it ain’t enough,” averred the first man.

“Two people earning that much can’t raise kids on that money,” lamented the first.

“Two people? What about all the single parents — they’ve got no chance at all.”

“How much does it take to get by in this neighborhood?”

“Gotta have a car to work, realistically.”

I think that is right: $40 an hour is what it would take before we stop hearing complaints about the minimum wage being too low.

The New York Times’ latest assault on Wal-Mart lays bare this fixation with the minimum wage. The author, Timothy Egan, takes the company to task for its low pay, expressing anger that Wal-Mart’s wages are so low that some of its workers qualify for food stamps, the Earned Income Tax Credit, and other government anti-poverty programs.

Such indignation begs a question: do Egan and the Times think that anti-poverty programs should exclude the working poor and go only to those without jobs, or that compensation should be so high that everyone who’s working can be presumed to be out of poverty? The Earned Income Tax Credit phases out for a couple with two kids in the vicinity of $50,000 a year, so if the latter is the standard to which the Times aspires, that would be a minimum wage of nearly $25 an hour for a family with a sole breadwinner.

It is hard to conceive of a Fortune 500 company that does not employ people whose wages are low enough to qualify for assistance, including the New York Times itself.

Mandating a higher minimum wage is not going to magically make low-skilled workers worth more money any more than mandating that people drive cars fueled by water will solve our energy problems (an idea I shouldn’t even joke about for fear of starting a groundswell among environmentalists). The minimum wage is a facile non-solution for the complicated problem of poverty in America.

The honest question is whether the benefits for those who keep their jobs would outweigh the social costs of fewer jobs for younger workers.

A nationwide minimum wage of $10.10 an hour would put close to a million workers out of a job, the Congressional Budget Office estimates, while research by economists Andrew Hanson and Zack Hawley suggests that a million lost jobs might be a low-end estimate, with the job losses most prevalent in the South and Midwest.

The conversation also illustrates another problem with a federally imposed minimum wage: labor markets across America vary enormously. A $10.10 minimum wage might have a small impact in my pricey neighborhood in urban Washington, D.C., but it would wreak havoc in rural areas where the cost of living — and wages — are generally much lower. If there’s any regulation that screams for a federalist approach to implementation it’s the minimum wage.

The other pertinent question to be asked — and one that usually isn’t — is who are the workers earning a minimum wage. Few dispute the fact that the majority of minimum-wage workers — 65 to 85 percent in most studies — are young adults still living at home with their parents. Raising their wages accomplishes little, but putting them out of a job can be especially problematic: the more difficult we make it for a teenager to get on the first rung of the ladder, the more difficult he will find it to climb to higher rungs. The earlier someone can learn the rules of the wicked workaday world — show up on time every day, don’t mock your boss, etc. — the better. The implicit trade-off between jobs for young workers and higher wages for older workers suggests that any poverty reduction from a higher minimum wage is merely ephemeral at best.

There’s no repealing the laws of supply and demand. Raising the minimum wage will reduce employment and anyone who disputes this is being deceitful. The honest question is whether the benefits of higher wages for those who keep their jobs would outweigh the social costs of fewer jobs for younger workers. There’s no compelling evidence that this is the case in the real world.

The Minimum Wage Can Never Be High Enough