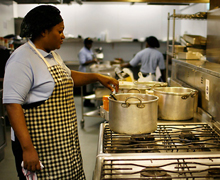 By Philip Wegmann | A small-town cafe ignited a firestorm of controversy that has engulfed Minnesota.

On Aug. 1, the state bumped the minimum wage from $7.25 to $8 an hour. A few days later, Stillwater Oasis quietly added a corresponding 35-cent “minimum wage fee” to customer receipts. 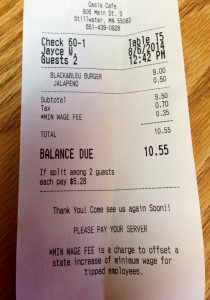 The company’s Facebook page became ground zero of the debate as hundreds of Minnesotans voiced their support and opposition to the surcharge.

Posting a picture of her receipt, Amanda Gutierrez lambasted the cafe for making its employees take the fall. “Shame on you,” Gutierrez wrote, for making employees “look like the bad guys.”

Cafe owner Craig Beemer replied that the surcharge compensates for the increased minimum wage. According to Beemer’s estimate, the minimum wage hike will cost his business more than $10,000 per year, an expense “which has to be offset by an increase in revenue in order to operate profitably.”

Wade Luneburg doesn’t have much sympathy to offer Beemer, though. The spokesman of Unite Here, the Twin Cities Hospitality Union, told the Star Tribune that “industry is overreacting” and vilified the surcharge for “creating an ‘us against them’ mentality.”

The 70-cent bump in minimum wage represents the first increase since 2009. While some herald it as a long-overdue reform, others fear the long-term consequences it will have on small business.

James Sherk, a senior analyst at the Heritage Foundation, warns that everyday Americans and inexperienced job seekers will bear the brunt of the cost for Minnesota’s wage increase.

“Raising the minimum wage gives some workers higher pay,” Sherk said, “but it costs others their jobs while forcing everyone to pay higher prices.”