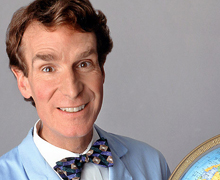 By Scott Clement | In the most unlikely of political talk show face-offs, Bill Nye (“The Science Guy”) will debate Tennessee Republican Rep. Marsha Blackburn Sunday on climate change and what’s up with recent weather in Sochi, Russia and the United States (not a joke).

The exchange on “Meet The Press” promises the familiar spectacle of controversy. Nye advocates action to address climate change and is fresh off a high-profile debate with a creationism proponent Ken Ham, while Blackburn is a vocal skeptic and vice chair of the House Energy and Commerce Committee.

But the meeting also puts in stark relief how much the scientific community has failed to communicate their message on global climate change. Perhaps Nye — who has perfected communicating complex subjects to children — will have more success.

On a core issue, scientists have consistently struggled to convince the public that they (scientists) agree humans are causing global warming. Consider the following:

Those perceptions far underestimate how much scientists actually agree. An extensive review of nearly 12,000 published papers from 1991 to 2011 led by John Cook and Dana Nuccitelli found 97 percent of those taking a position on the issue endorsed the idea of human-caused global warming. When Pew Research surveyed members of the American Association for the Advancement of Science where they stood in 2009, 84 percent said humans were causing global warming. And an identical 84 percent said this in a separate 2007 poll of members of two professional organizations for climate scientists (gated).

Some of the public’s mistaken perception is understandable, given few people are spending their free time reading up on climatology journals. But Americans also enter the debate with political views, with policy and partisan views helping them decide whether to embrace or reject new information. In one example, support for cap and trade legislation between 2008 and 2009 became a much stronger predictor of whether they expressed a basic belief in global warming, a shift that coinciding with a large drop in belief among Republicans, according to a 2010 paper analyzing Post-ABC polling data.

Knowledge about scientific agreement isn’t the only obstacle for supporters of efforts to curb global warming. As Wonkblog’s Brad Plumer explained, one of the biggest stumbling blocks is the perception that climate change consequences will mainly affect future generations or people in faraway places. While Americans consistently support government regulation of greenhouse gases, Gallup polls since the late 1990s have found a clear majority of Americans doubting global warming will seriously threaten them during their lifetime, even as most perceive some effects today.