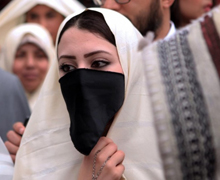 By Omar Belhaj Salah | Tunisia’s intelligentsia must move beyond seeing Muslim citizens as the violent ‘other’, instead embrace the right to peaceful religious expression.

The roads leading to the radicalisation of young Arab-Muslims are manifold. Nevertheless, all roads begin when their domestic intellectual elites fail to set up a model of governance that keeps up to their basic needs of recognition and meaningful inclusiveness.

On November 27, 1095, the head of the Roman Catholic Church, Pope Urban II, drafted a written call to declare the beginning of religious wars against Muslim societies. In this call he drew a powerful image placing a “Christian righteous West” which he represents in a divergent and irreconcilable position with a block of an “evil Muslim Rest”. He found in the stories of some Christian pilgrims coming back from Jerusalem who were then robbed by bandits, a good case to cast the latter block by identifying these bandits primarily as Muslims.

As this view of the Middle East and North Africa region continues to be enacted by some westerners through literature, film and media, it is – peculiarly – also adopted by people within the region itself. The Tunisian conventional intelligentsia, for instance, provides a typically good example.

For more than 50 years, this intelligentsia complained about the visibility of religious expression in society. This feeling they expressed through consistently backing two despotic regimes before the revolution which, in part, fed on suppressing social religious expression and the political leadership it represents.

Now despotism as Tunisians knew it has been mostly dismantled over the past four years. But little despots, here and there, continue to transgress the quest for a genuinely liberal and inclusive democracy. At one level, they do so by circulating terms like “barbarians, base and backward” to cast an Urban II-style sense of otherness targeting the more visibly identifiable Muslims in society. They do so, while at the same time, themselves, remaining unaffectedly subject to the original portrait of an “evil Rest” projected on them by today’s Christian righteous West.

This indicates the dysfunctional heritage of Tunisia’s conventional intelligentsia, its penchant for despotism and lack of compromise domestically, and its anxiety to appeal to the external expectation of a non-evil Muslim class of people.

The 20th episode of the weekly show Klem Ennes (talk of the peoples) aired on Al Hiwar Ettounsi TV on 18 February is one emblematic example of this heritage. Among other themes, the episode sought to discuss the Islamic State phenomenon and its relation to Tunisian religious groups.

The episode was arranged in the following format: a main guest Sofienne Ben Romdhane, the vice-president of the Islamic “Reform party”, placed next to six other participants: two commentators, one actress, an ex-police officer, a self-proclaimed secular activist, and the journalist who moderated the discussion. At short notice, the discussion diverted into an impeachment session against the main guest. All six participants including the moderator engaged Ben Romdhane in what seemed like a zero-sum contest of survival.

The two commentators accentuated the irrationality of Ben Romdhane’s claims, the actress and the ex-police officer hurled a batch of sensational histrionic remarks every now and then, the activist took a fierce nationalist stance and questioned his “Tunisianism” all together, delivering a vociferous sermon in an ostensibly patronising and degrading manner. To defend his position, Ben Romdhane repeatedly affirmed that, despite the religious tenor of his party, its activities are peaceful, law-abiding and are bound by the provisions of the constitution and the civil character of the state. Then he explicitly denounced the violence perpetrated by other religiously affiliated groups like the Islamic State in preaching their faith.

Nevertheless, the interveners were quite intransigent in refuting his argument, though without substance or clear evidence against it. Sheared of any other potentially relevant identity such as Tunisian or maybe politician, Ben Romdhane was eventually kept within Manichean bonds where he either had to accept the tacit grandeur of the speakers’ reasoning or assume the intrinsic devilishness attributed to his identity as “a Muslim”.

On the surface, scenes like this could strike many as a struggle between rationality and irrationality, reason and obscurantism. In effect they reflect a larger distorted reality for which the Tunisian conventional intelligentsia is held primarily accountable, where totalitarian pseudo–secularism mixes with oligarchic appetite for power and virulently clashes with outspoken religion. The outcome usually does not prove this intelligentsia’s presumed rational premise, as much as it causes the ostracism of non-violent religious citizens, propelling many of them to the shady margins of society where despair meets tête-à-tête with radicalism.

Like a vicious cyclone feeding off of its own energy, this sort of antipathy against explicit Muslims ends up producing violent responses by a few that reinforce the initial sentiments and justify yet more categorical exclusion against the many. In the meantime more young men and women continue to find grounds to legitimise advocacy for the vengeful radicalism of the Islamic State.

If this intelligentsia wants to regain some of its own legitimacy it has to step outside the Manichean logic of “the enlightened us” vs “the obscure them”. It has to help alleviate the nervousness of the young religiously minded citizens instead of fomenting it through insults and arbitrary force. Free and peaceful religious expression must be preserved and clearly distinguished from the violent sort. This would likely help breaking the cycle of antipathy inside Tunisia and minimise anxiety on the side of the “Christian West”.

The revolution gave this intelligentsia an exceptional opportunity to learn from 50 years of mistakes and democratise its agenda. It should not waste it.