What is the Wider Impact of the Hobby Lobby Ruling? 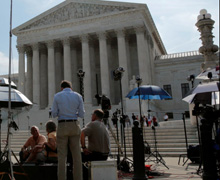 By Lyle Denniston | The Supreme Court sent a fairly strong signal on Tuesday that its ruling giving some for-profit businesses a right not to provide birth control services to their female workers goes beyond the specific methods at issue in that decision.  It issued a series of orders on six cases, each of which involved owners who objected to all of the pregnancy-related services mandated under the new federal health care law.

The decision Monday in Burwell v. Hobby Lobby Stores, and a related case, involved religiously devout business owners who objected to only four contraceptives: the “morning-after” pills Ella and Plan B, and two intrauterine devices (IUDs). 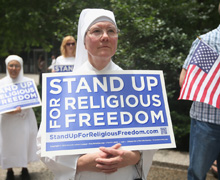 The Affordable Care Act regulations issued by the federal government, however, required twenty different preventive methods or services, including sterilization and pregnancy counseling.  Depending upon how lower courts now interpret the Hobby Lobby decision, companies that fit within the Court’s “closely held company” bracket and offer religious objections could be spared from having to provide any of those services through their employee health plans.

In three cases in which a federal appeals court had rejected the challenges to the mandate, the new Supreme Court orders told those courts to reconsider, applying Monday’s decision.   The companies or their owners had taken those petitions to the Court.

On three petitions filed by the federal government, involving appeals court rulings rejecting the challenges by corporations. their owners, or both, the Justices simply denied review.

Here are the details of the six petitions, and the Court’s reaction:

Autocam Corp. v. Burwell. The Catholic owners of a Michigan company that manufactures products for the auto and medical supply industries objected to all forms of services covered by the mandate.  The U.S. Court of Appeals for the Sixth Circuit rejected claims on behalf both of the owners and of their company separately.   The Supreme Court vacated that ruling and ordered a new look under Hobby Lobby.

Gilardi v. Department of Health & Human Services.  Two Catholic brothers who operate two Ohio companies that distribute fresh foods objected to all forms of preventive services.  The U.S. Court of Appeals for the District of Columbia rejected the corporation’s challenge, leading the brothers to appeal on that point.  (See below for the D.C. Circuit’s separate action on the owners’ claim.)  The Supreme Court ordered reconsideration of the denial of the corporate challenge.

Eden Foods v. Burwell.  The Catholic owners of an organic food company in Michigan objected to all forms of preventive services.   The Sixth Circuit Court, relying largely on its ruling in the Autocam case, rejected the claims both of the owners and of their company.  The Supreme Court ordered reconsideration of both aspects.

Cases denied review, with no explanation:

Department of Health & Human Services v. Gilardi.  This is one of the government appeals.  It involved the Catholic brothers and their food service companies in Ohio.  The D.C. Circuit ruled in favor of the brothers, in their capacity as owners, and their religion-based challenge to all forms of preventive services.   Review denied.

Burwell v. Newland.  Another government appeal.  This case involved the Catholic owners of a Colorado heating and air conditioning company, who objected to all services under the mandate.  The U.S. Court of Appeals for the Tenth Circuit, applying its decision when the Hobby Lobby case was before it, upheld the challenges of the owners and their company.  Review denied.

Burwell v. Korte.  Government appeal.  This case involved two Catholic families — one owning a construction company in Illinois, the other a vehicle safety manufacturing company in Indiana, who objected to all preventive services mandated.  The U.S. Court of Appeals for the Seventh Circuit upheld the challenges of both groups of owners and their companies.   Review denied.