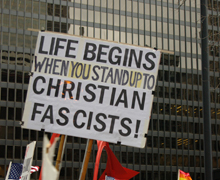 By George Yancey | As America’s religious landscape grows more diverse, we see Christianity’s cultural dominance fading. While a vast majority of the country and our leaders still identify as Christian, many conservative Protestants sense a growing animosity toward themselves and their beliefs.

For the Christian Right, recent conflicts aroundhomosexuality,church-state separation,abortion, and other hot-button issues are viewed as threats, indicators that their values are no longer embraced or even tolerated, but under attack.

When Atlanta fire chief Kelvin Cochran was fired earlier this year over a self-published book that briefly critiqued homosexuality, conservative Christians saw the incident as further evidence that they are losing their religious freedom.

Are these Christians worrying for no good reason?

Well, anti-Christian hostility is certainly real, captured by the American National Election Studies, which include questions about animosity toward various social groups. About one third of respondents rated conservative Christians significantly lower (by at least one standard deviation) than other religious and racial groups. 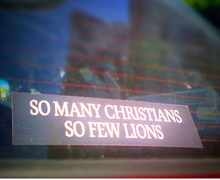 The only group to fare worse was atheists, who received low rankings from nearly half the respondents. But while atheists drew more global hostility than any other group, the negative rankings for conservative Christians came from a disproportionate number of white, highly educated, politically progressive, and wealthy respondents.

As this survey illustrates, animosity toward Christians involves racial, educational, and economic factors; the people most likely to hold negative views of conservative Christians also belong to demographic groups with high levels of social power. Rich, white, educated Americans are major influencers in media, academia, business, and government, and these are the people most likely to have a distaste for conservative Christians.

As a sociologist whose research focuses on race and religion, I was curious to know more about cultural progressive activists, individuals who oppose the political agenda of conservative Christians, and their views on the Christian Right. In 2009, I conducted an online survey of nearly 4,000 people who tended to fall into this politically progressive, highly educated, white and wealthy demographic.

Their attitudes reflected the negativity toward Christians found in earlier research, with some particularly extreme and troubling remarks. Responding to open-ended questions, they said:

“Churches and houses of religion should be designated as nuclear test zones.”

“Kill them all, let their god sort them out.”

I cannot determine by my data the percentage of Americans with such a level of vitriol, but judging by the comments, it’s not a trivial amount.

In the United States, hateful bigotry is directed not only toward groups such as racial and sexual minorities, but also toward conservative Christians. The survey comments evidence that some of the anti-Christian animosity veers into unreasonable hatred and fear. It’s Christianophobia.

From this research, I wrote my latest book, So Many Christians, So Few Lions, the title itself inspired by several respondents who joked about feeding Christians to lions.

According to one respondent, “I believe they seek to impose a theocracy on a secular nation, sort of a Christian Taliban.” This comment also indicates the frequent fear among my respondents that conservative Christians want a theocracy. One respondent stated, “Their agenda seems to include making America a theocracy, which frightens me, as it would take us back to the Dark Ages politically, culturally, educationally, and morally.” This fear ignores the reality that conservative Christians have the same desire to influence the public square as other social groups.

To Americans hostile toward Christianity, adherents fall into two categories: foolish, ignorant followers and manipulative leaders. For example, one of my respondents stated that Christians “pretend to be under attack from mysterious forces of evil by way of secularists, but this is merely a convenient boogie-man invoked to make their followers send them money and to make them appear as victims.” These stereotypes offer insight into those with Christianophobia, their concerns over Christian takeover, and their desire to limit Christian influence.

I have heard many Christians talk about being persecuted. Last year’s controversy over the subpoenas issued to Houston pastors opposing a transgender rights ordinance fed Christians concerns of religious freedom and targeting biblical views on sexuality. But persecution isn’t quite the right term. Americans with hostile views of conservative Christianity are quite satisfied with Christians as long as they keep their faith to themselves. As one respondent said, “Keep all religion in your church, in your home, out of the public square, and most of all, out of my face.” Another remarked, “Christian Right people can do what they want in their churches and homes, but not in the public arena.”

Such attitudes reflect notions of a privatization of religion, whereby people are free to believe whatever they want, but not to use their beliefs outside of their own private lives. (After all, that’s the attitude respondents have about their own faith. Why shouldn’t Christians feel the same way?)

Despite their views on Christianity, respondents remained ideologically committed to religious freedom and brought up notions of religious neutrality. They were generally not willing to directly impose their particular beliefs onto conservative Christians, though they would constrain how Christians exhibit their beliefs. Christian fears of non-Christians invading their churches and homes to rob them of the right to practice their faith are as irrational as the fears of theocracy some with Christianophobia possess.

When asked what sort of changes they want in society, respondents were willing to support policies with disparate effect against conservative Christians. One respondent stated, “I don’t think we should pass laws that are directed toward any particular group of people. However, if a particular good law happens to negatively affect practices or beliefs of the Christian Right, but protects the freedom of most Americans, then I would be in favor.”

This respondent sums up a popular mentality: Laws that disparately affect Christians can protect others from Christian attempts to take over society. If these laws are couched in terms of religious neutrality—like the “all comers” policies for student organizations—then those with Christianophobia can endorse them without worry about being stigmatized as bigoted. (There is a similar phenomenon noted in race/ethnicity scholarship. Public policy measures that seem racially neutral can work to the disadvantage of people of color. Restrictive immigration policies are theoretically racially neutral but disproportionally affect Hispanic Americans.)

This helps to crystallize the current conflict in our society between conservative Christians and those with hatred toward them. Christians face economically, educationally, and socially powerful individuals who seek to drive them from the public square. Many with Christianophobia are convinced that conservative Christians will drag our society back into the Dark Ages and must be stopped with any measure that cannot be defined as overt religious bigotry.

An important challenge for Christians is to convince such individuals that they have the same rights to influence the public square as anyone else. Learning how to communicate, and hopefully find ways to co-exist, with them will help determine whether there will be a persistent cultural conflict or if a truce is possible.