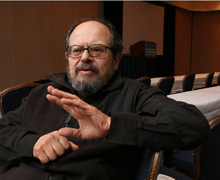 When you first meet Richard Lindzen, the Alfred P. Sloan professor of meteorology at MIT, senior fellow at the Cato Institute, leading climate “skeptic,” and all-around scourge of James Hansen, Bill McKibben, Al Gore, the Intergovernmental Panel on Climate Change (IPCC), and sundry other climate “alarmists,” as Lindzen calls them, you may find yourself a bit surprised. If you know Lindzen only from the way his opponents characterize him—variously, a liar, a lunatic, a charlatan, a denier, a shyster, a crazy person, corrupt—you might expect a spittle-flecked, wild-eyed loon. But in person, Lindzen cuts a rather different figure. With his gray beard, thick glasses, gentle laugh, and disarmingly soft voice, he comes across as nothing short of grandfatherly.

Granted, Lindzen is no shrinking violet. A pioneering climate scientist with decades at Harvard and MIT, Lindzen sees his discipline as being deeply compromised by political pressure, data fudging, out-and-out guesswork, and wholly unwarranted alarmism. In a shot across the bow of what many insist is indisputable scientific truth, Lindzen characterizes global warming as “small and .  .  . nothing to be alarmed about.”

Lindzen wasn’t a climatologist from the start—“climate science” as such didn’t exist when he was beginning his career in academia. Rather, Lindzen studied math. “I liked applied math,” he says, “[and] I was a bit turned off by modern physics, but I really enjoyed classical physics, fluid mechanics, things like that.” A few years after arriving at Harvard, he began his transition to meteorology. “Harvard actually got a grant from the Ford Foundation to offer generous fellowships to people in the atmospheric sciences,” he explains. “Harvard had no department in atmospheric sciences, so these fellowships allowed you to take a degree in applied math or applied physics, and that worked out very well because in applied math the atmosphere and oceans were considered a good area for problems. .  .  . I discovered I really liked atmospheric sciences—meteorology. So I stuck with it and picked out a thesis.”

And with that, Lindzen began his meteoric rise through the nascent field. Before his 40th birthday, he was a member of the National Academy of Sciences. In the mid-1980s, he made the short move from Harvard to MIT, and he’s remained there ever since. Over the decades, he’s authored or coauthored some 200 peer-reviewed papers on climate.

By the 1980s, global warming was becoming a major political issue. Already, Lindzen was having doubts about the more catastrophic predictions being made. The public rollout of the “alarmist” case, he notes, “was immediately accompanied by an issue of Newsweek declaring all scientists agreed. And that was the beginning of a ‘consensus’ argument. Already by ’88 the New York Times had literally a global warming beat.” Lindzen wasn’t buying it.

In the early 1990s, he was invited to join the IPCC, a U.N.-backed multinational consortium of scientists charged with synthesizing and analyzing the current state of the world’s climate science. Lindzen accepted, and he ended up as a contributor to the 1995 report and the lead author of Chapter 7 (“Physical Climate Processes and Feedbacks”) of the 2001 report. Since then, however, he’s grown increasingly distant from prevalent (he would say “hysterical”) climate science, and he is voluminously on record disputing the predictions of catastrophe.

Lindzen doesn’t deny that the climate has changed or that the planet has warmed. “We all agree that temperature has increased since 1800,” he tells me. There’s a caveat, though: It’s increased by “a very small amount. We’re talking about tenths of a degree [Celsius]. We all agree that CO2 is a greenhouse gas. All other things kept equal, [there has been] some warming. As a result, there’s hardly anyone serious who says that man has no role. And in many ways, those have never been the questions. The questions have always been, as they ought to be in science, how much?”

Lindzen says not much at all—and he contends that the “alarmists” vastly overstate the Earth’s climate sensitivity.  Judging by where we are now, he appears to have a point; so far, 150 years of burning fossil fuels in large quantities has had a relatively minimal effect on the climate. By some measurements, there is now more CO2 in the atmosphere than there has been at any time in the past 15 million years. Yet since the advent of the Industrial Revolution, the average global temperature has risen by, at most, 1 degree Celsius, or 1.6 degrees Fahrenheit.

Lindzen also disputes the accuracy of the computer models that climate scientists rely on to project future temperatures. He contends that they oversimplify the vast complexity of the Earth’s climate and, moreover, that it’s impossible to untangle man’s effect on the climate from natural variability.

If Lindzen is right about this and global warming is nothing to worry about, why do so many climate scientists, many with résumés just as impressive as his, preach imminent doom? He says it mostly comes down to the money—to the incentive structure of academic research funded by government grants. Almost all funding for climate research comes from the government, which, he says, makes scientists essentially vassals of the state. And generating fear, Lindzen contends, is now the best way to ensure that policymakers keep the spigot open.

Richard Lindzen presents a problem for those who say that the science behind climate change is “settled.” So many “alarmists” prefer to ignore him and instead highlight straw men: less credible skeptics, such as climatologist Roy Spencer of the University of Alabama (signatory to a declaration that “Earth and its ecosystems—created by God’s intelligent design and infinite power and sustained by His faithful providence—are robust, resilient, self-regulating, and self-correcting”), the Heartland Institute (which likened climate “alarmists” to the Unabomber), and Senator Jim Inhofe of Oklahoma (a major energy-producing state).

But Lindzen, plainly, is different. He can’t be dismissed. Nor, of course, is he the only skeptic with serious scientific credentials. Judith Curry, the chair of the School of Earth and Atmospheric Sciences at Georgia Tech, William Happer, professor of physics at Princeton, John Christy, a climate scientist honored by NASA, now at the University of Alabama, and the famed physicist Freeman Dyson are among dozens of scientists who have gone on record questioning various aspects of the IPCC’s line on climate change.

One frustrating feature of the climate debate is that people’s outlook on global warming usually correlates with their political views. But whatever buried ideological component there may be to any given scientist’s work, it doesn’t tell us who has the science right. In a 2012 public letter, Lindzen noted, “Critics accuse me of doing a disservice to the scientific method. I would suggest that in questioning the views of the critics and subjecting them to specific tests, I am holding to the scientific method.” Whoever is right about computer models, climate sensitivity, aerosols, and water vapor, Lindzen is certainly right about that. Skepticism is essential to science.

In a 2007 debate with Lindzen in New York City, climate scientist Richard C. J. Somerville, who is firmly in the “alarmist” camp, likened climate skeptics to “some eminent earth scientists [who] couldn’t be persuaded that plate tectonics were real .  .  . when the revolution of continental drift was sweeping through geology and geophysics.”

“Most people who think they’re a Galileo are just wrong,” he said, much to the delight of a friendly audience of Manhattanites.

But Somerville botched the analogy. The story of plate tectonics is the story of how one man, Alfred Wegener, came up with the theory of continental drift, only to be widely opposed and mocked. Wegener challenged the earth science “consensus” of his day. And in the end, his view prevailed.

Free Think University offers a course experience examines both sides of this debate.  Sign in to the class here to learn more about this course experience, which is free for students and will qualify them to participate in America’s fastest-growing college scholarship fund.