The Supreme Court and Jesus’ Name: Decision for Freedom 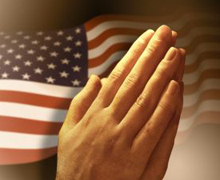 By John Stonestreet | In a surprise to many, the Supreme Court has ruled you can not only open a town meeting in prayer, you can even mention Jesus.

Since 1999, the town board of Greece, New York, has opened its monthly meeting with a prayer given by a local member of the clergy. Because Monroe County, New York, is approximately two-thirds Catholic, one-quarter Protestant and the rest mostly Jewish, the demographics indicated that the vast majority of these clergy would be Christian. And not surprisingly, Christian clergy prayed like, well, Christians, ending prayers with “in Jesus’ name.” 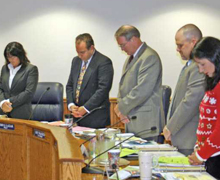 And that’s how this town with a population of only 94,000 people wound up at the Supreme Court.

Two residents of Greece took the city to court claiming that the prayers violated the First Amendment’s Establishment Clause. They weren’t challenging the practice of praying before meetings. After all, the Supreme Court in the 1983 Marsh v. Nebraska decision had upheld prayers before the start of legislative business, due to the long history of the practice that predates the Constitution itself.

Instead, they argued that the prayers were too Christian, and thus the town board was “promoting” Christianity. They also argued that the relative intimacy of a local town board meeting, as compared to a state legislature, created a “coercive” environment.

By a 5-4 vote, the Supreme Court disagreed and upheld the practice. Writing for the majority, Justice Anthony Kennedy wrote that nothing in the Constitution or the applicable case law mandates that only the “most general, nonsectarian reference to God” is permissible in the public sphere, as the plaintiffs contended. He pointed out that the drafters of the First Amendment “would have been accustomed to invocations containing the explicitly religious themes” that the plaintiffs objected to.

He noted that Congress “continues to permit its appointed and visiting chaplains to express themselves in a religious idiom,” not by “proscribing sectarian content,” but by allowing them to express their beliefs. Thus the Dalai Lama invoked the Buddha, a Hindu clergyman cited the Hindu scriptures and an imam called Muhammad “The final prophet of God.”

As Justice Kennedy wrote, “From the earliest days of the Nation, these invocations have been addressed to assemblies comprising many different creeds . . . . Our tradition assumes that adult citizens, firm in their own beliefs, can tolerate and perhaps appreciate a ceremonial prayer delivered by a person of a different faith.”

This call for toleration and appreciation led Kennedy to reject the argument that the prayers “create social pressures that force non-adherents to remain in the room or even feign participation in order to avoid offending the representatives.”

He noted that board members and constituents are “free to enter and leave with little comment and for any number of reasons.”

And in any case, “quiet acquiescence will not, in light of our traditions, be interpreted as an agreement with the words or ideas expressed.”

The decision is good news. And while it doesn’t break any new ground, it certainly protects old ground which seems, at times, very vulnerable these days. So, we’ll take it.

The Alliance Defending Freedom, which helped support the town of Greece before the Court, said the ruling “preserves the public prayer tradition that began with our founding, protects the freedom of community volunteers to pray according to their faith in a public setting, without censorship, and defends the prayer giver’s freedom of speech over an ‘offended’ person’s demands for censorship.”

But do keep this in mind: The ruling makes it clear that Christianity’s place in the American public square is that of one truth claim among many. The ability to open a town council meeting by praying in Jesus’ name is contingent on the ability of Muslims, Hindus, and even Wiccans to invoke their deities as well. As Eric Metaxas and I have said before, the freedom to worship God and serve God—or not—is God’s gift not just to Christians, but to all people.

Is America a Christian Nation?

Should This Book Be Banned?

The Supremes and Jesus’ Name