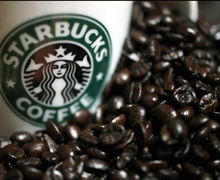 By Micah Solomon | Starbucks’ new Racetogether campaign is an effort by the coffee giant to start a conversation on race relations between employees and customers at its nearly 6,500 company-owned locations in the U.S. The attempt to start dialog on a subject that’s often treated as taboo and toxic has been raising eyebrows and tweets coast to coast, some supportive, many of them snarky.

As I see it, the Racetogether concept (kumbaya though it sounds) has the potential to draw on and energize two of the most important forces a company have going for it: First, customer engagement. One of the most powerful forces for building and sustaining a company is the power of engaged customers. Customers who interact passionately with a brand are customers who spend more, who convert their friends, who even help shape the brand as it moves forward. Second, employee engagement: Nothing can drive a company forward, especially one in the service industry, like engaged employees: employees who are invested in their jobs, not only in carrying them out to the best of their ability but in finding ways to improve the actual design of their jobs and of their organization. 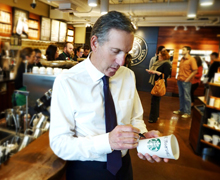 However, customers and employees are both tricky elements when you are responsible for brand management, for the preservation of an iconic, powerful brand. Because customers, engaged customers, are unpredictable, as are engaged, empowered employees.  And lack of predictability doesn’t feel good to those tasked with managing iconic brands, a responsibility that strikes fear–and generally causes paralysis–in those who are in charge.

As a result, leaders of iconic brands tend to see their job as just squeeze- squeeze-squeezing every dollar out of their brand’s power “until the eagle grins,” as the old song goes, reducing the vagaries of employee empowerment and customer engagement to as close to zero as they can manage while still making incremental pennies on the dollar.

Starbucks, though, is a little different.  Patagonia, ditto. Virgin, check.  Not a whole lot of other exceptions out there.

When an iconic brand goes out on a limb, stretching from its area of indisputable power and success, it can be easy for the rest of us to have some fun with it (ex: the pillorying of Patagonia over its “buy less” campaign).

And boy, have we been having some fun of late at Starbucks’ expense.

The thing is, Starbucks isn’t just a brand.  It’s also one of the only companies in America with a physical, visible presence in almost every community in the nation.  With literally millions of customers with whom it interacts every single day, often multiple times a day.  And with hundreds of thousands of employees who face many of the same challenges and concerns as do those customers.

What Starbucks leadership “kept hearing back from the partners,” Laurel Harper at Starbucks HQ here in Seattle tells me, is this. “They kept pushing to find out ‘what can we do?’ Not to demand change, but to discuss change.  Our partners asked the leadership if they could help start a national conversation, knowing the scale of Starbucks, knowing we’re located across the country.”

As Stage 2, Starbucks will be using their stores this Friday to host a collaboration with USA Today: a conversation guide about race which will be prominently displayed and offered for free at all stores.

So where does this leave us with the snarkosphere?  Look, I have as catty a sense of humor as almost anyone I know, and I understand how easy it is to poke fun at this initiative, how support groupish the Starbucks’ language of “race journeys” and the like can sound.  However, Starbucks is getting a lot of things right here.  Not necessarily as a brand, but as an organization, and as what can be called [literally, after Citizens United] a corporate citizen.  Employees, and customers, today, want a brand to stand for something. Employees, and customers, today, are far, far more diverse than they were in previous generations.

(If you wanted to generalize about Boomers or the Silent Generation in the U.S., you’d be wrong to say “they’re all white,” but you wouldn’t be wrong by all that much. Ninety percent of the Silent Generation is white [80% are non-Hispanic white], and even among Boomers, 73% are non-Hispanic white. The makeup of the nation’s largest generation in history, the rising millennial generation, is far different. Only 61% of millennials are non-Hispanic whites. And take note that these “minorities”–hardly the right term– are far from evenly dispersed across the country, and are disproportionately represented in cities. In metropolises of significant size around the country, “minority” [Hispanic, Asian-American and African American] groups together make up the majority. )

And as far as the critiques that a barista shouldn’t be using their relatively humble position in an organization and in their customers’ lives to talk about important issues?  One of the central rules of anything—anything—happening in history is that you use what you’ve got.  The Montgomery Bus Boycott (and believe me, I realize quite that this is not an exact parallel in about 14,500 ways!) was just that: the simple decision of black people in one community to walk and carpool instead of continuing to ride a segregated bus system, hardly an ideal seat of power from which to start, but it is what they had and they used it–and the results, ultimately, were profound. Going back farther in history, the path to the founding of the United States was emboldened by businesspeople discussing in the shop and marketplace the strictures of British commercial policies.

You use what you have.  Or you don’t.  Starbucks has made its choice, and, in the end, it fits their brand, their organization, and employees.  To give Howard Schultz the last word, “Staying silent is not who we are.”