How are Colleges and Evangelicals Colliding on Bias Policy? 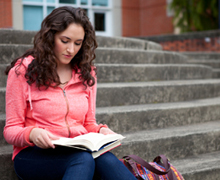 By Michael Paulson | BRUNSWICK, Me. — For 40 years, evangelicals at Bowdoin College have gathered periodically to study the Bible together, to pray and to worship. They are a tiny minority on the liberal arts college campus, but they have been a part of the school’s community, gathering in the chapel, the dining center, the dorms.

After this summer, the Bowdoin Christian Fellowship will no longer be recognized by the college. Already, the college has disabled the electronic key cards of the group’s longtime volunteer advisers.

In a collision between religious freedom and antidiscrimination policies, the student group, and its advisers, have refused to agree to the college’s demand that any student, regardless of his or her religious beliefs, should be able to run for election as a leader of any group, including the Christian association. 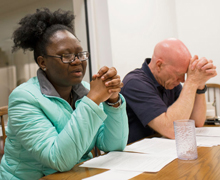 Esther Nunoo, a freshman, and Robert Gregory, a volunteer, at a Bible study at the Bowdoin Christian Fellowship, which the college will no longer recognize. Credit: Katherine Taylor for The New York Times

Similar conflicts are playing out on a handful of campuses around the country, driven by the universities’ desire to rid their campuses of bias, particularly against gay men and lesbians, but also, in the eyes of evangelicals, fueled by a discomfort in academia with conservative forms of Christianity. The universities have been emboldened to regulate religious groups by a Supreme Court ruling in 2010 that found it was constitutional for a public law school in California to deny recognition to a Christian student group that excluded gays.

At Cal State, the nation’s largest university system with nearly 450,000 students on 23 campuses, the chancellor is preparing this summer to withdraw official recognition from evangelical groups that are refusing to pledge not to discriminate on the basis of religion in the selection of their leaders. And at Vanderbilt, more than a dozen groups, most of them evangelical but one of them Catholic, have already lost their official standing over the same issue; one Christian group balked after a university official asked the students to cut the words “personal commitment to Jesus Christ” from their list of qualifications for leadership.

At most universities that have begun requiring religious groups to sign nondiscrimination policies, Jewish, Muslim, Catholic and mainline Protestant groups have agreed, saying they do not discriminate and do not anticipate that the new policies will cause problems. Hillel, the largest Jewish student organization, says some chapters have even elected non-Jews to student boards.

The evangelical groups say they, too, welcome anyone to participate in their activities, including gay men and lesbians, as well as nonbelievers, seekers and adherents of other faiths. But they insist that, in choosing leaders, who often oversee Bible study and prayer services, it is only reasonable that they be allowed to require some basic Christian faith — in most cases, an explicit agreement that Jesus was divine and rose from the dead, and often an implicit expectation that unmarried student leaders, gay or straight, will abstain from sex.

“It would compromise our ability to be who we are as Christians if we can’t hold our leaders to some sort of doctrinal standard,” said Zackary Suhr, 23, who has just graduated from Bowdoin, where he was a leader of the Bowdoin Christian Fellowship.

The consequences for evangelical groups that refuse to agree to the nondiscrimination policies, and therefore lose their official standing, vary by campus. The students can still meet informally on campus, but in most cases their groups lose access to student activity fee money as well as first claim to low-cost or free university spaces for meetings and worship; they also lose access to standard on-campus recruiting tools, such as activities fairs and bulletin boards, and may lose the right to use the universities’ names.

“It’s absurd,” said Alec Hill, the president of InterVarsity, a national association of evangelical student groups, including the Bowdoin Christian Fellowship. “The genius of American culture is that we allow voluntary, self-identified organizations to form, and that’s what our student groups are.”

The Bowdoin group has about 45 people on its mailing list, including 25 regular participants, on a campus of 1,800 students. The group notes that its participants, young people still figuring out where they stand on many subjects, have varying views on issues like same-sex marriage.

A few weeks ago, the Bowdoin group gathered for a final dinner at the Center for Multicultural and Spiritual Life at the college, thanking not only the graduating seniors, but also Robert and Sim Gregory, who volunteered with Bowdoin for a decade but are no longer recognized as advisers.

The students, who plan to meet informally in the fall and may seek an off-campus site for worship, are bewildered by the turn of events. “We can’t discriminate on religion, and we’re a religious group!” exclaimed Olivia Cannon, 18, a Bowdoin student.

At Cal State, evangelicals are facing a similar conundrum. “We’re not willing to water down our beliefs in order to be accepted,” said Austin Weatherby, 20, a Cal State Chico student. He sometimes leads Bible study, and said he had to agree that he believes in the Holy Trinity and the Resurrection to do so. “Anyone can join, but if you want to lead a Bible study, you need to believe these things,” he said.

Cal State officials insist that they welcome evangelicals, but want them to agree to the same policies as everyone else. “Lots of evangelical groups are thriving on our campuses,” said Susan Westover, a lawyer for the California State University System. However, she said, there will be no exceptions from the antidiscrimination requirements. “Our mission is education, not exclusivity,” she said.

At Vanderbilt, the decision to push groups to sign antidiscrimination policies was prompted by a Christian fraternity’s expulsion of a member who came out as gay. About one-third of the 35 religious groups on campus have refused to sign and are no longer recognized by the school; they can still meet and recruit informally, and the campus Hillel has even opened its building for meetings of one of the Christian groups.

“I am hopeful for a better future, but I’m not naïve, there are some issues that are irresolvable,” said the Vanderbilt chaplain, the Rev. Mark Forrester, who is a United Methodist minister. “This is a larger social and ethical struggle that we as a society are engaged in.”