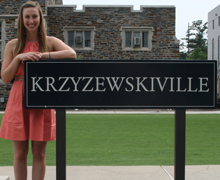 Free Think U Foundation is proud to highlight another of its recent members, Libby Hase, who graduated from Duke University in December 2012. Libby has received a grant of $1,000 for her involvement as a student editor for Free Think University.

Libby became part of Free Think University because of its objective to promote conversation about important, relevant ideas in today’s society.

“I love Free Think University because it presents a fascinating, relevant topic and encourages you to choose your own point of view,” Libby said. “Many times in school we are ‘taught at.’  People in my generation often don’t make the effort to form their own opinions. As members of our society, we need to be able to think for ourselves, form an opinion, and express that in an articulate way.”

Libby, 23, is a public and private school educated daughter of two parents whom she looks up to as her inspiration to live a purposeful, impactful life. She completed her undergraduate college education from Duke University, earning her degree in Psychology. She has a wide range of passions and would like to pursue a combination of social entrepreneurship, business, health, and nutrition.

Many experiences have created in Libby a deep passion for traveling and understanding other cultures. She has been on mission trips to Haiti and Mexico, has been in a student ambassador program to England, Wales, and Ireland, served in a volunteer position at an orphanage and school in a small village in Tanzania, and has enjoyed studying and entrepreneurship experiences in Brazil.  She wants to go back to Brazil to work in social entrepreneurship and serve the underprivileged.

Highlights of her time at Duke include interning at one of the top anti-domestic violence organizations in New York City, Sanctuary for Families, being a Resident Assistant in the Duke dormitories, and participating in the Duke Engage program dealing with women’s rights and activism. After graduating from Duke University last December, she worked as a research assistant in the Duke Medical Cognition Laboratory and as a mentor and tutor for several Duke football players. She recently completed a marketing and communications internship in Rio de Janeiro, Brazil and moved to Greensboro to be part of the Greensboro Fellows program through Church of the Redeemer.

“We’re excited about identifying and rewarding students who represent the next generation of leaders in America, and Libby Hase will be one of them,” Free Think U cofounder Jim Van Eerden said.