Zombies vs. the Resurrection of the Dead or Nihilism on Tap 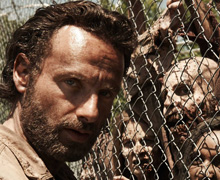 By Eric Metaxas | Late last month, just two weeks after the start of its fourth season, AMC announced that it had renewed “The Walking Dead” for a fifth season.

While the word “zombie” is never used, “The Walking Dead” is about zombies, mindless reanimated corpses that feed on human flesh. Set in the aftermath of a “zombie apocalypse,” it tells the story of a group of survivors, led by a former sheriff named Rick Grimes.

This was in part because the biggest threat to the survivors more-often-than-not comes from other survivors. The post-apocalypse world is a Hobbesian war of all against all.

This war, coupled with the absence of any hope for a reprieve, gives “The Walking Dead” an oppressively grim tone that is even more disturbing than the violence. A colleague of mine, who gave up on the show for this reason, calls it “nihilism on tap.”

It’s a quality it shares with most of the growing library of Zombie pop culture artifacts, a library that now has 18,000 books and 7,000 videos at Amazon. Even when humanity eventually triumphs, as in “World War Z,” it’s only after the vast majority of humanity has been wiped out.

With a few notable exceptions, such as “World War Z,” the world left in the wake of the zombie apocalypse is one that makes survivors envy the truly dead.

That shouldn’t come as a surprise…zombies are a parody of the resurrection of the dead.

This point was made in season two of “The Walking Dead.” A character, who is described as a “man of faith,” says “I can’t profess to understand God’s plan, Christ promised the resurrection of the dead. I just thought he had something a little different in mind.”

Unfortunately for those caught up in the “zombie apocalypses,” God isn’t in control, if He even exists at all. Instead, there is only an indifferent, if not malevolent, nature, which has concocted a grotesque parody of the basis of Christian hope.

Thus, not only are the survivors on their own, they are also without the things that give meaning and purpose to life. Life is reduced to biological survival. Love, kindness, and sympathy are, at best, luxuries and more likely hindrances to survival.

Scott W. Poole, of the College of Charleston, and author of “Monsters in America,” has called the zombie craze a “subversive reimagining of Christian eschatology,” one that “takes a central element of that system,” the resurrection of the dead, “and turns it into a symbol of sacrilege.”

It is not a coincidence, as Poole has noted, that this “reimagining” is taking place in a post-Christian culture in which “religious symbols, and symbols of sacrilege, are up for grabs in a way that we have never seen before.”

And what has been grabbed is not only the stuff of nightmares but also the denial of life itself. Talk about a no-brainer!