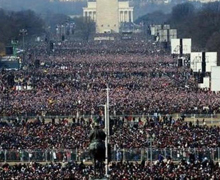 By Ashley Bateman | When I was unborn, test results showed me likely to have Down Syndrome. Parents abort most babies like me nowadays. That’s why I march for life.

Every January, beginning on a Monday, a great, collective memory of marches resonates throughout our nation. A man of great strength and character, a talented orator and advisor, one who established bridges between a broken people, Martin Luther King Jr. is rightfully and respectfully celebrated and mourned; we recollect the social justice he fought for. King’s March on Washington moved millions, and changed laws. But other marches, historical and widespread, continue, striving to do just that.

While King’s great march moved a nation, marchers for life still struggle to rally the national conscience to recognize the extreme and irrevocable action of abortion.

For 42 years supporters of life have marched on Washington during the March for Life, unfettered by excuses and explanations, with one singular and simple cry to acknowledge the most basic human right to life. 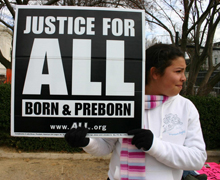 Although science has tried to manipulate, reinvent, and re-envision it, creation remains a miraculous thing. We have applied so many brilliant discoveries to the sustainment of life, to lengthening and improving it, and as we gain a clearer view of the evidence of life the term ‘choice’ has become increasingly popular. The choice to dictate which human beings are desirable and wanted, and eradicate those who are not.

Fetal abnormalities, diagnosed through prenatal screening tests, account for a low number of unborn children, but a high number of abortions. Nearly 85 percent of unborn children testing positive for a range of genetic or other diseases are aborted. Trisomy 21, commonly known as Down Syndrome, is the most common birth defect in the United States. It is a disease potentially recognized through screening and diagnostic tests.

I was one of those positive screenings.

The second half of the 1980s brought about a new screening test for pregnant women. Through DNA testing, researchers could now detect, with some error, Trisomy 21 through prenatal blood testing.

My parents, devout Catholics, accepted the screening test as an additional part of my mother’s routine obstetric care. It was presented to them as new research, still in the data collection stage; an enlightening, responsible measure for new parents, to better prepare themselves for potential challenges. My parents didn’t link the testing results to cause for termination.

My percentage of probability to carry Trisomy 21 was rather high. High enough that doctors presented options: further testing, in the form of an amniocentesis, or an abortion. My parents would not consider either. An amniocentesis, they were accurately informed, carried a high risk of death for a fetus and an abortion was certain death. My mother did consent to increased heart monitoring and a series of ultrasounds, and passed several anxious months. Nearly 75 percent of Down Syndrome babies do not make it into the world due to natural defects in utero. A high percentage are born with birth defects and require immediate medical attention.

We March for Life, to End Discrimination

DNA testing is in itself, highly controversial. Before Down Syndrome testing infiltrated routine obstetric care, the topic had not been widely assessed by ethical boards and the breadth of error in testing was wide. A development in medical research that could have directed doctors and families to better preparedness quickly became a vehicle to eliminate life.

My parents were blessed with four healthy children, defined as genetically “normal” by today’s medical standards. Had I been born a different child, what an extraordinary education they would have received. Had I not been born, what a loss the world would have had at never knowing my own two children.

King marched as a man of faith, of belief in human rights.