Why the Competition of Ideas Matters 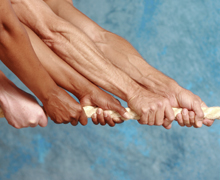 By Arthur C. Brooks | It is a uniquely American belief that competition is the fuel for human flourishing. European commentators in early America were amazed at the popular love for what Alexis de Tocqueville called, “self-interest rightly understood.” This competitive ideal, Tocqueville noted, “Is as often asserted by the poor man as by the rich.”

The competitive ideal persists in America, by and large. The World Values Survey (WVS) in 2006 found that 55% of Americans told survey researchers, “Competition is good,” versus just 5% who said, “Competition is harmful.”

To understand just how much this attitude differs from the rest of the world, consider that the French in 2006 were about half as likely as Americans to say competition is good, nearly five times as likely to say that competition is harmful.

Competition in what? Business, sports, and politics, obviously—but other areas as well, that go back to America’s founding. For example, given their radical views on freedom of religion and the separation of church and state, it was clear that America’s founders believed in a competitive market for souls.

“In a free society, some ideas spread while competing ideas do not. Following Jefferson, that competition is a true moral good.”Frequently overlooked but critically important is the competition of ideas. In an 1813 letter, Thomas Jefferson wrote, “That ideas should freely spread from one to another over the globe, for the moral and mutual instruction of man, and improvement of his condition, seems to have been peculiarly and benevolently designed by nature.”

In a free society, some ideas spread while competing ideas do not. Following Jefferson, that competition is a true moral good. It strengthens America’s free society by creating choice in the democratic process, fostering policy innovation, and providing a peaceful outlet for citizen discontent.

That is why it is so dangerous when powerful actors work not to win the competition of ideas, but instead to shut it down–by narrowing acceptable discourse, squashing protest, silencing minority viewpoints, and anathematizing people of opposing opinions.

Throughout our history, when unable to win the idea competition legitimately, unprincipled forces on both the right and left have taken the route of intimidation and personal attack to silence the ideas they dislike.

Today, there is no better example of shutting down the competition of ideas than the scandals at the Internal Revenue Service. As we now know, the IRS flagged and delayed conservative groups’ applications for nonprofit status, sometimes for years–and apparently long enough to keep many sidelined for the 2012 election.

My AEI colleague Stan Veuger shows in a new article appearing in the Quarterly Journal of Economics that tea party activism radically inflected voter turnout for Republicans in 2010. By suppressing the tea party, the IRS no doubt directly harmed Republicans in 2012. By how much? We will never know.

The best defense that administration officials and its apologists seem able to muster is a highly-dubious claim that the IRS may have also harassed and delayed some left-wing groups—missing the point entirely that shutting down the competition of ideas between citizens is the real scandal, especially for an agency of government.

What is the cost of this scandal? To begin with, it delegitimizes government and thus weakens democracy. By merging the objectives of bureaucracy and partisan politics, the IRS has shown ordinary Americans that conspiracy theorists might not be so crazy after all. And this will add fuel to the pervasive belief that the government simply cannot be trusted.

Trust in government before the scandal was already near an all-time low. According to the Pew Research Center, only 26% of Americans earlier this year said they trust the government “just about always,” or “most of the time.” Thank the IRS when this falls even further.

Another cost of this scandal, as Jefferson would surely point out, is moral. In our country today, citizens are not just wary of the IRS; they are frightened of the agency. Americans—especially those without sophisticated tax counsel or insider connections—feel completely vulnerable to IRS power, which seems arbitrary and capricious. For this agency then to wield its power over vulnerable citizens in a politically-motivated way violates the most basic moral standards of fairness.

To shut down the competition of ideas is a soft tyranny—both contrary to the principles of the nation, and as appears sadly likely, the legacy of our modern politicized bureaucracy.