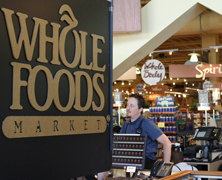 By Ira Stoll | In his new book, the co-founder of Whole Foods Market promotes free-market thinking while criticizing Wall Street. John Mackey, the cofounder and co-CEO of Whole Foods Market, has a flair for well-timed entries into public policy debates, as readers of his 2009 Wall Street Journal op-ed attacking Obamacare may recall.

Now Mackey is back, along with a co-author, Raj Sisodia, with a new book, Conscious Capitalism: Liberating the Heroic Spirit of Business. It has just been issued by the Harvard Business Review Press, and it is bristling with ideas just as provocative as the ones Mackey arrayed against Obamacare a few years back.

CEOs of consumer-facing businesses tend to be either reticent or vague about political matters for fear of offending potential customers. No so Mackey, who early on in the book mentions reading free-enterprise thinkers like Friedrich Hayek, Ludwig von Mises, Milton Friedman, Jude Wanniski, Henry Hazlitt, and Thomas Sowell. “I learned that free enterprise, when combined with property rights, innovation, the rule of law, and constitutionally limited democratic government, results in societies that maximize societal prosperity and establish conditions that promote human happiness and well-being—not just for the rich, but for the larger society, including the poor,” he writes.

Much of the book proceeds along these sensible lines. Mackay writes, for example, that in 2011, the taxes his company paid were “more than twice as high as the profits we were allowed to keep.” ($343 million in after-tax profits, $825 million in total taxes.). “If business taxes were lower, all the other stakeholders would have more — lower prices for consumers, higher wages and benefits for team members, and higher net profits for investors, and the amount of money we could give to support the nonprofit sector would also be proportionately greater,” he writes.

To the extent that Mackey wants to change current business practices—and he does—he writes that “the lead agents of change need to be those who are engaged in business—not politicians, bureaucrats, or regulators.” This, too, makes plenty of sense.

Where Mackey gets out onto thinner ice is when he attacks entire sectors of the private economy, in vitriolic terms. “It sometimes seems that the values and philosophy of Wall Street has become a type of cancer that is corrupting the healthier parts of the larger economic system,” he writes, criticizing what he calls the Wall Street philosophy “that only profits and maximizing shareholder value really matter.”

He’s similarly negative about the pharmaceutical industry. “Americans take way too many pharmaceutical drugs in a futile effort to maintain their health and vitality. These are not nutritive substances, and all have some toxic effects on our bodies,” he writes. “Elsewhere,” he explains, “Medicine has become a very expensive automobile repair shop delivering first aid, pharmaceutical drugs, medical devices, and surgeries that primarily address symptoms rather than sources of diseases. Instead, it should primarily be based on studying optimum health and teaching people how to live healthy lives through better diets, healthy lifestyles, exercise, rest, positive attitudes, and so forth.”

Diet, exercise, and rest are great, but the idea that, say, cancer or major depression can be treated with “positive attitudes” rather than surgery or modern medicine is a sign of flawed thinking that sometimes also affects this book’s treatment of its core subjects, business and capitalism.

Here the book argues that “conscious capitalism”—an approach that gives a high priority not only to shareholders but also to “stakeholders” such as customers, suppliers, and employees, and that emphasizes a business mission other than profits—is “the secret to sustained high performance.”

Mackey’s best example is his own company. Its mission includes “to help end poverty around the word.” It has a policy that “caps the total cash compensation, including bonuses, for any team member at nineteen times the average pay of all team members.” It has a decentralized management approach and an innovative and flexible approach to non-cash benefits for employees.

The book claims that the shares of “conscious” companies outperform the stock market overall. That is based on a study in which the 18 outperforming conscious companies were Amazon, BMW, CarMax, Caterpillar, Commerce Bank, Costco, eBay, Google, Harley-Davidson, Honda, JetBlue, Johnson &  Johnson, Southwest Airlines, Starbucks, Timberland, Toyota, UPS, and Whole Foods Market. News coverage of some of these companies, however, depicts them as something less than the model corporate citizens they are described as when they are mentioned in the book. Johnson & Johnson, for example, has been in the headlines recently for selling hip implants known to be defective. Two Commerce Bank executives were convicted of federal crimes for approving personal loans to a Philadelphia city official to get the city’s banking business. Some of these 18 firms are discussed in detail in the book, but others are ignored, or mentioned only glancingly.

The worst idea in the book, though, comes not in Mackey’s text, but in the foreword by Bill George, a professor at Harvard Business School and the former CEO of Medtronic. Professor George argues that corporations have a responsibility to society in part because “it was society that chartered the limited liability corporation and granted companies the right to operate.”

I prefer the alternative view that “the right to operate” a business is not granted by society but rather stems from the rights of property, association, and pursuit of happiness that are inalienable, natural rights. With George’s framework, the chances of a policy outcome dictated by Mackey’s terrible troika of “politicians, bureaucrats, or regulators” becomes more likely. As a choice by the owner of a business, “conscious capitalism” is fine. But if government starts commanding it as a condition of allowing businesses “the right to operate,” one suspects that even Mackey may come to wish he let Friedman, Hayek, and Von Mises have the last word.