Whither the Boy Scouts? 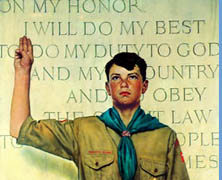 By John Stonestreet | BSA’s Significant Decision | Early this week, the Boy Scouts of America announced that they may soon drop their national policy that prohibits openly homosexual Scouts and scout leaders from participating. Instead, it would allow local units to make the decision.

So in other words, Scout units based in Bible-believing churches may continue to uphold their moral and religious convictions on human sexuality. And homosexual youths and adults will no doubt find units based in public schools or more liberal churches that would welcome them.

So what does all this mean?

First, this change is about survival for the Scouts, not new convictions. For years, the organization has been the target of gay activists and atheist groups. And those characters know exactly how to hit organizations that oppose them where it hurts most: in the pocketbook and in court. Already, many major corporations and charities have been pressured into de-funding the Boy Scouts. And for years the Scouts have incurred the heavy financial burden of defending their ability to set their own membership standards all the way to the Supreme Court.

It may be that the Scouts have decided the only way for the organization to survive is to allow local groups to decide for themselves.

But even so, I think this policy change is a bad decision, not just for the Scouts, but for our country and our culture.

For one thing, even if the Boy Scouts do go ahead and let local affiliates decide whether to allow homosexuals to participate, many gay activists won’t call off the assault.

As the father of a Scout who had proclaimed his open homosexuality told the Daily Beast, “This is really only half the battle. BSA is still going to allow discrimination [against gays] in those local units that believe it to be the right thing to do. The eventual outcome,” he says, “has to be the complete removal of any opportunity to discriminate in any form. This is a major victory, but we haven’t yet won the war.”

And don’t think atheist groups haven’t noticed. Just Wednesday, the Freedom from Religion Foundation said “It is absolutely outrageous that the Boy Scouts of America, which has proudly excluded both atheists and gays from its membership, announced yesterday” that it is considering “lifting its ban on gays — but not atheists.”

So you see, no matter what the Scouts do, the war against them—and religious freedom—will continue.

And it’s more than just the Scouts who will pay. You’ve heard Chuck Colson, Eric Metaxas, and me speak many times here on BreakPoint about the importance of intermediate institutions—the family, churches, synagogues, civic groups and associations like the Boy Scouts. These institutions are essential in shaping character, forming solid citizens, and creating responsible communities. The Boy Scouts in particular have offered the young men in our society training in leadership and responsibility, that for many, set them on solid ground for the future.

But for years these institutions have been increasingly marginalized by the state, and targeted by homosexual and anti-religion activists. If the Boy Scouts will cave under this pressure, activists will think they can do it to anybody. And don’t think they won’t try.

So here are three things you can do right now. First, call the national Boy Scouts Headquarters and encourage them to stand strong against this bullying. Come to BreakPoint.org, click on this commentary, and we’ll give you the phone number. Second, call your local Scout leaders or Scout councils. Urge them to call the national headquarters as well. And third, of course, pray. Pray for wisdom for all Boy Scout leaders and the future of this organization that has served our nation’s young men so well for so long.