What Does Ebola Say About the American People? 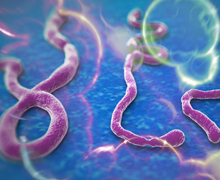 By Heather Wilhelm | If you’ve ever spent significant time in Africa—and I mean real, gritty Africa, not the gauzy, Abercrombie & Kent-guided, cocktails-on-the-Serengeti Africa that many moneyed Americans know—you might understand why the current Ebola outbreak is so scary.

In many parts of the continent, sanitation is sporadic; in some, it is practically nonexistent. In the places where Ebola has struck the hardest, cultural and religious norms often conflict with Westernized medical care. In Sierra Leone, as the New York Times recently reported, many villagers attribute the recent rash of gruesome deaths to witchcraft or curses—and therefore feel free to ignore the advice of various moon-suited Western interlopers on the basics of disease prevention.

Even in Africa’s more developed countries, such as Ghana, it’s not unusual to see massive, crowded shantytowns tightly interwoven with exposed sewage ditches. Sanitation is a luxury; elbow room a pipe dream. When I was there, one slum, crushed for space, extended perilously over a set of busy train tracks. Several times a day, at the sound of a not-so-distant horn, shopkeepers would frantically scramble to move their booths out of the train’s way. Then, with nowhere else to go, they’d set them right back up on the tracks. 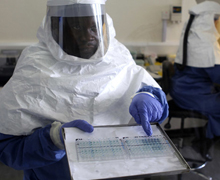 Now, as everyone knows, Ebola is in America, hosted by two unfortunate, infected doctors who’ve been sanitized, quarantined, and subject to a run of tests in a clean, shiny Atlanta hospital. At least one person in New York City has been tested for the virus; recent news reports put the number of those being tested nationwide at six. With the immense scale of modern international travel, it is hard to imagine that there won’t be more flare-ups or scares in the United States. And while some Americans have pressed the panic button (Emory University Hospital, which is treating the Ebola patients, is reportedly receiving hate mail), much of the country seems to share a refrain chanted repeatedly in much of this week’s press: “It can’t happen here.”

America, it is argued with great authority—sometimes from an epidemiologist in the New York Times, other times from that old Facebook friend who, as you foggily recall, might have failed high school biology—is too clean, modern, and organized for an Ebola outbreak. We are sophisticated, rich, and beyond the threat of various lurking horror-movie viruses.

In Monday’s Wall Street Journal, Dr. W. Ian Lipkin, an infectious disease expert from Columbia University, assured readers that Ebola won’t likely spread in America, not even in close quarters: The virus, he writes, “has a high mortality rate (up to 90 percent) but is spread only through intimate contact with bodily secretions such as vomit, blood, or feces. There is no risk in sitting next to an infected traveler on an airplane.” (With all due respect, the good doctor has obviously not recently flown next to a 2-year-old, where the odds of intimate contact with at least two out of three of those “bodily secretions” remains startlingly high. On a similar note, I would also bet that he has never been on a cheap flight home—also known as a “vomit comet”—full of Vegas weekenders.)

This expert-driven advice is fine, I suppose, as I’m not quite ready to run to the store for piles of Spam, batteries, and bottled water yet. (Actually, I’m lying. I did all that on Monday, after I read the news of the Ebola testing in New York. On the downside, I’m paranoid. On the upside, I have canned “chunky” chicken with an expiration date of September 2016!)

No matter your feelings on crazed grocery runs, a definite strangeness surrounds America’s leading Ebola narrative. There is, for instance, a whole lot of condescension going on. On Monday, online magazine Slate ran a “myth-busting” piece on Ebola, explaining why you’re pretty much a moron to worry even a little bit about a contagious virus that can melt your insides. The article included an alarming-looking photo, featuring three individuals in hazmat suits, with the following caption: “Members of Doctors Without Borders wear protective gear on July 23, 2014, in Conakry, Guinea, in a scene that’s not coming to the U.S. anytime soon.”

Ah, the smugness. Can you feel it? America is rich, you see. Africa, meanwhile, is The Other. This sentiment, explicit or not, is echoed repeatedly in much of the “don’t panic” press. Slate’s caption, when you think about it, isn’t too far from a recent headline from the satirical news site The Onion: “Experts: Ebola Vaccine at Least 50 White People Away.”

Along with the media’s passive-aggressive smug-a-thon, there’s a more subtle subtext to America’s expert-driven Ebola narrative: a striking, desperate search for a sense of control. Our government, we are reminded, is far more organized than that of Sierra Leone or Nigeria. Our government, we are told, knows what it is doing. Our government is filled, after all, with “experts.” Our government also, lest you forget, is an often-confused behemoth that recently “misplaced” 327 vials of “biological materials,” including dengue fever, influenza, random mystery viruses, and six vials of smallpox, in a random cold storage room in Bethesda, Md.

Putting the vast, terrifying library of government incompetence aside, based on the facts we know—and unless something changes—we can be reasonably optimistic that the experts are right. Ebola, in Africa and elsewhere, will hopefully be contained and effectively treated. But the leading American narrative on the disease shows a lot about how we tend see our country (often, with a sense of entitlement), what we hope for (a sense of control), what we fear (a lack thereof), and how we see the world. Often, unfortunately, we don’t really see the world at all—unless, of course, it gets all up in our business. In times like these, it’s worth a second look.

What Does Ebola Say About Us?