Were Christian Missionaries a Force for Good? 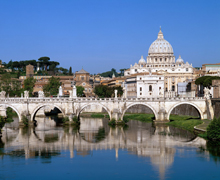 By Eric Metaxas | What’s been perhaps the greatest force for democracy and freedom in the world?

It was a world in which the gods “were everywhere and thought to be undependable.” That’s because, apart from “some magical powers” and “perhaps the gift of immortality,” there was little to distinguish them from their human worshippers: “they ate, drank, loved, envied, fornicated, cheated, lied and otherwise set morally ‘unedifying examples.’ ”

Not surprisingly, they didn’t care about their worshippers. All they wanted was to be propitiated.

In other words, they were not worthy of worship.

Roman society could be just as oppressive and undependable as the gods it worshipped. For most people, life in the empire’s cities could be fairly described, to borrow a phrase from philosopher Thomas Hobbes, as “nasty, poor, solitary, brutish, and short.”

It was into this world that Christianity was born. It triumphed because it offered an alternative to the oppression of Roman society and the dead-end of paganism, an alternative that was so compelling it outweighed the disadvantages of being identified as a Christian.

As Stark writes, “in the midst of the squalor, misery, illness, and anonymity of ancient cities, Christianity offered an island of mercy and security.”

Here’s the thing: when you read Stark’s words, you realize that we also have something compelling to offer our contemporaries.

It starts with understanding that many of our contemporaries also worship deities that are undependable and scarcely distinguishable from their worshippers: that’s because they worship themselves.

The Oxford English Dictionary defines “worship” as “the feeling or expression of reverence and adoration for a deity.” This worship then transforms the worshipper. As Ralph Waldo Emerson wrote, “the Gods we worship write their names on our faces; be sure of that . . . thus, it behooves us to be careful what we worship, for what we are worshipping we are becoming.”

Emerson didn’t foresee the age of social media in which we increasingly worship what we’ve become or at least what we imagine ourselves to be. Many pages on Facebook and Instagram can, with almost no exaggeration, be called shrines.

Of course, these deities are even more of a dead end than the pagan gods of Rome. What’s more, self-worship can be a lonely place. After all, the Greek gods didn’t play well together, either. While today’s pagans are far from anonymous, they are no less isolated than their ancient predecessors. A 2011 Cornell study found that the average American has only two “good friends.”

What we have to offer is remarkably—or not—similar to what the early Christians had to offer: what Stark called an “intense community,” a place where, instead of being surrounded by strangers, they are surrounded by “brothers and sisters in Christ.” A place that when the hard times come, as inevitably they will, “there [are] people who care—there are people who have the distinct responsibility to care.”

Stated succinctly, what we have to offer is a better way to be human.

That’s why, despite the often-distressing state of our culture, I am hopeful. The alternative we have to offer our contemporaries is just as desperately needed as what the early Church offered the Romans. What’s needed is for us to proclaim and embody that alternative.

If we do, it could be Christmas Eve once again.