We Have Not Yet Begun to Fight 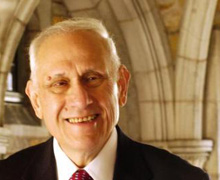 By John Mark Reynolds | The Wall Street Journal, noting the retirement of Donald Kagan, states the obvious: higher education is broken. Its brokenness begins with the faculty.

College is expensive, dominated by faculty unions, and hostile to moral education. Higher education does research well and is vital to our continued economic growth, but it no longer forms leaders fit for Republican values.

What does it profit our republic if we gain scientific power, but lose any ability to use it morally?

Kagan is right that law and liberty must remain in tension for a republic to thrive. If anything, he understates the degree to which liberty has degenerated to the libertine. But Kagan is wrong that the fight is ended. Parents and students have a choice in higher education: schools with a strong Western core, a commitment to science and research, and traditional moral values still exist….

Legacy colleges and universities will continue to dominate for a time based on inherited prestige and wealth, but a change is coming.

It is coming because while wealthy, historically excellent schools will continue to dominate in scientific areas, they have abdicated moral leadership. All the scientists in creation cannot get an “ought” from the “is” they study, but a republic requires a basic consensus on what “ought to be.”

Yale and other legacy schools are part of the problem, but this brave Yale professor has not found the cure.

A soft secularism did not provide the thunder from New England pulpits for liberty or send the boys in blue marching to die to “make men free” as Jesus died to “make men holy.” Soft secularism cannot resist the twin evils of theocracy or the bloodthirsty secularism that dominated the twentieth century.

Reason is a tool, not a blueprint for building a republic. Our Founders used the tool of reason and provided a blueprint based on their Western values: a fusion of Greco-Roman and Judeo-Christian ideas.

This middle ground was hard to find and was the work of centuries of Western civilization. Christian apologist and philosopher John Locke understood the need for a moral consensus built on natural law and revealed religion. If a person accepted the laws of Nature and Nature’s God, then the commonwealth would tolerate his or her private beliefs….

[What is required is those] ready to defend republican values against extremism on the right and left…embrace the need for research, but not at the expense of moral education… [and] love liberty in markets constrained by moral values: [those who] know how to set the entrepreneur free while retaining the moral clarity needed to condemn the Scrooge….

There is still time for a revival of the old faith, before extremists, either secular or religious, destroy our peace….

Without it, the treason of the professors may indeed doom the Republic.