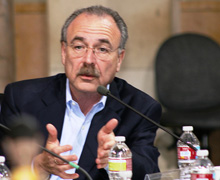 By Jason Howerton | Few would deny that many of America’s most prestigious academic institutions are left-leaning. Many of those tasked with educating the next generation, the country’s professors and teachers, seem to be unafraid to push a stunningly biased viewpoint onto students — though that’s not to say all educators are guilty of this.

However, the expanding trend does beg the question: Is this something parents and students just have to accept as the norm?

According to University of Southern California student Tyler Talgo, the answer is no. Tired of being subjected to “indoctrination” in his classes, he began recording some of his professors’ lectures to expose the utter lack of objectivity in the classroom.

In a video, secretly recorded by Talgo, Darry Sragow, adjunct professor of political science at USC, can be heard blasting Republicans and labeling them “stupid” and “racist.” The video was recorded during the Fall semester in 2012, prior to the November election.

Interestingly, this author was not entirely shocked by Sragow’s inflammatory comments. Not because what he says in the video is reasonable or accurate, but because this sort of rhetoric has become so common in colleges and universities that not much is really “shocking” anymore.

Here are some quotes from some of Sragow’s lessons at USC:

“California Republicans, I just showed you, are 30 percent registration in this state, ’cause they’re really stupid. And racist.”

“The Republican Party in California, as I say all the time, on the record, in print and on radio and on TV, is the last vestige of angry, old white people.”

“Republicans are trying to prevent people of color and people of lower income from voting by requiring voter I.D.”

“You have more trust in old white people than I do… Old white guys are stubborn sons of b**ches, they just are.”

“There are tens of thousands of people who are now dead because George Bush, even though he got fewer votes, became president of the United States. That’s a fact.”

In other portions of the video, the professor is essentially campaigning for Barack Obama.

“Romney tends to, you know, make sh*t up,” he tells students after calling him a “loser.”

The professor also went after Ann Romney, saying she looks like “she’s out of 1955.”

“The women who are going to help decide the race are often women who have to work for a living, maybe single, maybe divorced, maybe single parents who are raising kids. And she looks like she is hanging out at the county club in Mad Men,” he added.

Watch the full video via Campus Reform below (Warning: Some strong language):

Several times in the video, Sragow tells students they have to “beat” Republicans.

“All campaigns have a message. Vote for Obama because he’s gonna create jobs, keep the peace and protect Social Security,” the professor explained before giving Romney’s campaign message. “Vote for Romney because Obama’s all f**ked up and I gotta do things differently. K? Whatever.”

And as far as any Republicans who may still live in California, the state doesn’t “need” you anymore, he explained. “They are totally irrelevant and clinically depressed,” Sragow said.

Talgo, a sophomore at USC, told TheBlaze that he has had problems with a number of professors at USC who try to “indoctrinate students with their political agenda.”

He also said he didn’t speak up or disagree with Sragow out of fear he might receive a grade lower than he deserved. No student should be intimidated into keeping quiet while enrolled in a course he or she is paying for, the student explained. The video is Talgo’s own way of speaking up.

“Students shouldn’t put up with this because the money we spend on tuition is being used against us in the form of viewpoint discrimination,” he told TheBlaze. “A student going to class to learn about the subject he or she is passionate about shouldn’t result in him or her being so offended because of a professor’s ruthless political agenda.”

Talgo said he hopes other students follow his lead and demand educators stop imposing their views on their pupils. “I felt that it was my duty to make sure that they were held accountable for what they were saying and to expose what is going on in nearly every college campus in America,” he added.