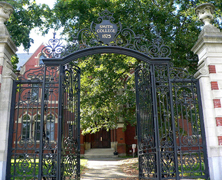 By Kevin Staley-Joyce | Feminism of the primitive observance meets Third-wave feminism in this unusual story. Calliope Wong, who self-identifies as neither male nor female, applied to the famously “lifestyle left” and female-only Smith College, only to be turned down on grounds of gender.

The story, written up in The American Prospect, points out that the 1970s feminist attitudes ensconced at Smith are quaint by today’s standards. While an earlier generation of feminists accepted psychological identity as integrated with bodily form, today’s feminists are increasingly strict mind-body dualists, holding that the mind determines gender entirely apart from biology—a ghost in the body’s machine.

The details, as with all such matters, are complicated: Wong may be admitted to Smith if she checks off “female” on her application. But Wong identified as male when applying for federal financial aid, meaning Smith would risk its status as a historical women’s institution by admitting her. And the only recourse the feds will recognize to amend her aid application is gender-reassignment surgery.

The article’s author had this to say of the generation gap amongst feminists, including those who denied Wong’s college application. It would seem the movement has a longstanding crisis of identity-acceptance—one that pales in comparison to the discrimination they attribute to the conservative movement:

But despite their commitment to gender equality, many feminist institutions have long had trouble seeing trans women as part of the movement. Cisgender feminists of the 1970s often viewed their trans sisters with suspicion, as though they were men in dresses trying to invade “real” womanhood. Some women’s centers, rape-support organizations, and lesbian-rights groups have gone as far as expelling trans women from their midst. The legendary Michigan Womyn’s Music Festival has always barred trans women from entry (and still does). Second-wave thought leaders like Mary Daly called them “Frankensteins” and in her book, The Transsexual Empire, radical anti-trans feminist Janice Raymond accuses trans women of “appropriating” the female body and many other much less pleasant things. After decades of protest and education, many cis feminists and their organizations have “evolved” on trans rights, but it’s not hard to find Raymond’s heirs active today, even in the younger generations. Wong’s case clearly illuminates how quick some feminists still default to some very conservative, essentialist beliefs about gender when it suits them.