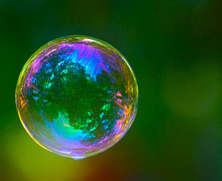 By Richard Vedder | Higher education is in a bubble situation—its price has risen sharply, fueled by cheap federal loan and grant money (sound familiar?) while the return on the investment has fallen. More and more college students are either not graduating or are taking jobs that do not require college-level skills and often pay mediocre amounts. In investor parlance, the price-earnings ratio on investing in higher education seems to be rising sharply. Where markets operate without external interference, there would be a correction. Sensing lower returns on their investment, the demand for higher education would fall and, with that, enrollments. Declining demand would lead to falling tuition fees, etc. Colleges would layoff lots of workers.

Yet market forces in this sector are grossly distorted by governmental and, to a much smaller extent, private philanthropic payments. Subsidies are propping up a situation that is unsustainable in the long run, but can be maintained at least temporarily without critically altering enrollment and pricing situations. Thus the way and timing of the bursting of the bubble is different than say, the housing or equity markets, but the bursting will occur nonetheless.

There are several reasons for this. The traditional 18-22 year old age cohort is not growing, meaning one source of increased higher education demand is drying up. Rising government outlays to prop up the sector are ending—subsidies for state universities are down, and a huge increase in federal financial aid funded out of stimulus funds is likely to end and probably even reverse. Longer term, the rise in the elderly population relative to the working age population is increasing the burden on workers to maintain the elderly, potentially crowding out spending on other things, including college subsidies. Also, the ability to increase subsidies ultimately depends in part of economic growth—rising per student spending is easier to do if income levels themselves are rising healthily. The first decade of the 21st century had the lowest growth rate of any since the Great Depression, and there are no signs that growth rates are ready to resume former rates. Huge increases to government financial liabilities, most notably the exploding federal debt financed by huge borrowing, are not likely to continue, and, indeed, cannot continue if the U.S. wants to maintain a reputation as a trustworthy borrower of funds.

These are not things that will go away with a resumption of relatively prosperous times.  The law of diminishing returns has hit higher education with a vengeance. At the margin, the incremental resources (students) produced from higher education investments are adding less and less output (manifested in employment income) to the economy, as more of them are forced to take relatively low paying jobs. The number of new college graduates exceeds the numbers of new jobs that truly require higher level education skills—mostly positions in management, technical areas, or the professions. Moreover, more and more of the incremental enrollment resulting from higher government subsidies in modern times consists of students lacking the cognitive skills, discipline, prior educational training, etc., necessary for mastering higher order intellectual material.

The Obama approach is to deny all of this, assert that it is wrong, the evidence notwithstanding. Many of his congressional allies agree, wanting, for example, to permanently maintain and expand upon the Pell Grant program which, over just the last couple of years, has already roughly doubled in size. The imperatives of reducing trillion dollar deficits, however, make this an increasingly unrealistic position.

The sad thing about it all is that much of the increase in governmental spending that is at the root cause of most of the bubble has been undeniably wasted. The goal was to increase enrollment among the poor, arguing that equal educational opportunity is an important step in achieving the American Dream. Yet the percentage of college students in, say, the bottom quintile of the income distribution is lower today than it was in 1970 before we even had, for example, Pell Grants.

Student learning in college is problematic in magnitude, as the Arum and Roksa book, Academically Adrift so clearly demonstrates. Many students have no better critical learning skills as senior as they did as freshman. Less than half of students graduate within the four years. Students spend less than 30 hours a week in study, class attendance, paper preparation, etc. Increasingly, college is a hedonistic warehouse, a place to house persons for several years after high school.

While productivity in America has risen at a roughly two percent annual rate ever since 1870, in higher education productivity growth at best is stagnant and very likely has declined. Most professors, for example, teach the same way Socrates did 2,400 years ago (excepting prostitution, teaching is the only profession I know with absolutely no productivity advance over that period).

Why are we doing this? Why are we throwing so much public money at this? When the public starts questioning this seriously and that translates into political action, the bubble will surely burst.

Richard Vedder is Distinguished Professor of Economics at Ohio University, Director of the Center for College Affordability and Productivity and an Adjunct Scholar at the American Enterprise Institute