The High Cost of Education 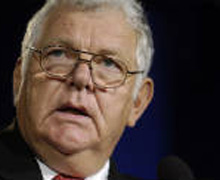 By Arthur Herman | The median pay for public-college presidents is now $441,392, with four presidents being paid more than $1 million a year.

Despite the growing evidence that colleges and universities cost too much, deliver too little and push too many young people into a lifetime of debt, the idea of going to college remains a key part of the American Dream. Now William Bennett, a former secretary of education and the author of “The Book of Virtues” (1996)—along with his co-author, David Wilezol—takes on a question that parents and teens are starting to ask: Is college worth the ever-increasing price tag? The authors’ answer is a hesitant “yes,” but with plenty of provisos and warnings about bigger problems ahead.

Since 1990 the cost of attending a four-year college or university has risen four times the rate of inflation. It’s no longer just Harvard or Cornell that has seen costs soar. According to the authors, the average price of attending an American public college—to judge by current trends—will have doubled, by 2016, in just 15 years.

At the same time, the average pay for college grads in America has fallen 5% since 2007-08. Almost half of all four-year college graduates now work at jobs that don’t require a college degree, like serving as a retail clerk or making cappuccinos at Starbucks. Leaving aside a few elite institutions—and degrees in high-demand fields like math, science and engineering—never have so many charged so much for so little.

What’s gone wrong? In the authors’ view, the chief culprit has been the federal government. In many ways “Is College Worth It?” is an extended restatement of the Bennett Hypothesis, first formulated in a New York Times article in 1987: College tuitions will rise as long as federal subsidies do. To those who like to point out that both federal and state aid to higher education has fallen in the past decade, Messrs. Bennett and Wilezol answer that the real driver of debt has been federal student loans. Those have ballooned by 60% in the past five years alone to more than $900 million, while grants-in-aid, like Pell grants, have tripled in value over the past decade. It’s a classic example of the perils of a third-party payer system, with students, parents and institutions caught in a vicious cycle of rising costs and declining quality.

Knowing that Washington is going to pump in money to make college more “affordable” only encourages colleges and universities to raise their tuitions and fees and ignore cost inefficiencies, including administrative and bureaucratic bloat. (From 1993 to 2007, per-student administrative costs leapt more than 61%. Last week, the Chronicle of Higher Education reported that the median pay for public-college presidents is now $441,392, with four presidents being paid more than $1 million a year.) The search for loan-subsidized customers encourages schools to lower academic standards, inflate grades (today A grades account on average for 43% of all college letter grades), and offer more “pop” courses and trendy majors so that students can glide along and earn an easy degree. Meanwhile, those who have dined on such lighter-than-air academic fare wind up saddled with debt and increasingly unable to find a job that can pay it off.

Who gets hurt most in this unsustainable cycle? First, young people who find that the “college experience” has turned them into debt peons. In 2011, two-thirds of the students getting bachelor degrees needed some kind of loan to finish college. In 1991, one in 10 American households owed some form of student-loan debt; today it’s one in five, with a bigger proportion than ever owing $100,000 or more.

The second harmed group, Messrs. Bennett and Wilezol note, are those at the bottom of the economic scale, for whom college used to be a ticket out of poverty but who increasingly can’t afford it even with the explosion of federal help. In 1970, 12% of recent college graduates came from the bottom quarter of the income distribution; today it’s barely 7%. Then there are taxpayers who have to pay for defaulting loans (more than one in four in 2012) and get a poor return on the nation’s investment in higher education. Last but not least, there are the institutions of higher learning themselves, whose value and prestige in the public’s eye have steadily moved downward as costs move upward. In 2008, 81% of Americans thought college education was worth it; today it’s 57%.

The authors propose various solutions to the problem: reforming K-12 education to make it better at equipping students who decide not to go to college and might more profitably attend a vocational school; getting students to pick more marketable majors, like computer science and engineering instead of conflict resolution or diversity studies; letting the Army or Navy pay for college through ROTC programs; and, most important, shifting more of the higher-education curriculum over to online courses, which will lower costs both to schools and to students.

Still, no one should expect sweeping changes any time soon—not with the federal government still supplying the dollars and millions of families still signing on to the myth that “everyone should go to college.” Like the Roman Catholic Church on the eve of the Reformation, the American university, one of this country’s great institutions, has become a refuge for timeservers and charlatans and lost sight of its core principles. In the case of the Reformation, as we know, it was a technological shift (in the form of the printing press) and popular resentment channeled by figures like Martin Luther that forced the old system to change. Today the Internet may help, and dissenters like Messrs. Bennett and Wilezol. “Is College Worth It?” may not be the equivalent of Luther’s 95 theses, but it is an indispensable guide to the crisis that colleges, students, parents and taxpayers now face.