What’s the Glitch in Our Moral Software? 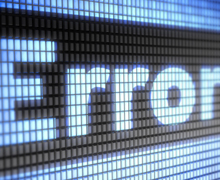 By Eric Metaxas | Black Friday came a little early this year in Louisiana, with shoppers emptying store shelves. But why it happened says a lot about who we are as humans…

On October 13, Wal-Mart shelves in Springhill and Mansfield, Louisiana, were stripped bare as hundreds of shoppers descended on the stores. The occasion for the unseemly behavior wasn’t a Black Friday sale but, instead, a computer glitch.

The glitch was in the software that administers food stamps. Food stamp recipients receive electronic benefit transfer, or EBT, cards that function in much the same way as your debit card.

And like your debit card, there’s a balance, and if you try to spend more than the balance, the transaction won’t be approved. However, on that Saturday night, the EBT cards weren’t showing a balance. Wal-Mart decided to allow purchases on the cards, anyway.

Word spread about the loophole in the system, and the result was a run on the stores. The Springhill chief of police said that the resulting crowd was worse than any “Black Friday” he’d ever seen.

A woman whose actual balance was forty-nine cents put $700 worth of food in her carts. Unfortunately for her, by the time she tried to check out the system was working again.

Reactions to what happened differed among those who didn’t participate in the free-for-all. One shopper thought the response to the glitch was just “human nature.” Other shoppers weren’t so forgiving: They told a local television station that what happened was “plain theft.”

And of course, both are right. For people who knew or should have known how much was remaining on their cards sweeping store shelves clean is theft. And it’s also human nature, the result of what we Christians like to call “the Fall.”

And by “human,” I don’t mean only the kind of people stereotypically associated with the food stamp program. In Plato’s “Republic,” Plato recounts the legend of the Ring of Gyges, which enables its wearer to become invisible and, thus, to do whatever he desires without fear of being caught.

According to Plato, people who do the right thing when no one can see them are truly happy; while those who take advantage of the invisibility the ring provides are slaves to their appetites.

If Plato was correct, then slaves come in all shapes, sizes, and income brackets. Five years ago, the global economy was nearly destroyed by people in expensive suits who believed they had discovered the financial and legal equivalent of the Ring of Gyges.

They peddled derivatives and mortgages they knew were garbage. Yet no one was saying “no!” so they went ahead.

Like those Wal-Mart shoppers, they took advantage of a glitch in the system. As Bob Dylan once sang, “Steal a little, and they put you in jail. Steal a lot, and they make you king.”

How right Chuck Colson was to say that the virtues are laws for healthy souls. And healthy souls are a prerequisite for a healthy civilization.  >>LEARN MORE BY WATCHING COLSON AND OTHERS INTERVIEWED BY BRIT HUME AT PRINCETON UNIVERSITY IN THE FREE THINK U COURSE ENTITLED:
HOW DO I DO THE RIGHT THING?