The End of Courtship? 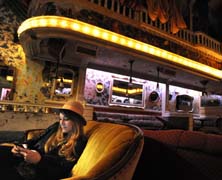 By Alex Williams | Maybe it was because they had met on OkCupid. But when the dark-eyed musician with artfully disheveled hair asked Shani Silver, a social media and blog manager in Philadelphia, out on a “date” Friday night, she was expecting at least a drink, one on one.

Turned off, she fired back a text message, politely declining. But in retrospect, she might have adjusted her expectations. “The word ‘date’ should almost be stricken from the dictionary,” Ms. Silver said. “Dating culture has evolved to a cycle of text messages, each one requiring the code-breaking skills of a cold war spy to interpret.”

“It’s one step below a date, and one step above a high-five,” she added. Dinner at a romantic new bistro? Forget it. Women in their 20s these days are lucky to get a last-minute text to tag along. Raised in the age of so-called “hookup culture,” millennials — who are reaching an age where they are starting to think about settling down — are subverting the rules of courtship.

Instead of dinner-and-a-movie, which seems as obsolete as a rotary phone, they rendezvous over phone texts, Facebook posts, instant messages and other “non-dates” that are leaving a generation confused about how to land a boyfriend or girlfriend.

“The new date is ‘hanging out,’ ” said Denise Hewett, 24, an associate television producer in Manhattan, who is currently developing a show about this frustrating new romantic landscape. As one male friend recently told her: “I don’t like to take girls out. I like to have them join in on what I’m doing — going to an event, a concert.”

For evidence, look no further than “Girls,” HBO’s cultural weather vane for urban 20-somethings, where none of the main characters paired off in a manner that might count as courtship even a decade ago. In Sunday’s opener for Season 2, Hannah (Lena Dunham) and Adam (Adam Driver), who last season forged a relationship by texting each other nude photos, are shown lying in bed, debating whether being each other’s “main hang” constitutes actual dating.

The actors in the show seem to fare no better in real life, judging by a monologue by Zosia Mamet (who plays Shoshanna, the show’s token virgin, since deflowered) at a benefit last fall at Joe’s Pub in the East Village. Bemoaning an anything-goes dating culture, Ms. Mamet, 24, recalled an encounter with a boyfriend whose idea of a date was lounging in a hotel room while he “Lewis and Clarked” her body, then tried to stick her father, the playwright David Mamet, with the bill, according to a Huffington Post report.

Blame the much-documented rise of the “hookup culture” among young people, characterized by spontaneous, commitment-free (and often, alcohol-fueled) romantic flings. Many students today have never been on a traditional date, said Donna Freitas, who has taught religion and gender studies at Boston University and Hofstra and is the author of the forthcoming book, “The End of Sex: How Hookup Culture is Leaving a Generation Unhappy, Sexually Unfulfilled, and Confused About Intimacy.”

Hookups may be fine for college students, but what about after, when they start to build an adult life? The problem is that “young people today don’t know how to get out of hookup culture,” Ms. Freitas said. In interviews with students, many graduating seniors did not know the first thing about the basic mechanics of a traditional date. “They’re wondering, ‘If you like someone, how would you walk up to them? What would you say? What words would you use?’ ” Ms. Freitas said.

That may explain why “dates” among 20-somethings resemble college hookups, only without the dorms. Lindsay, a 25-year-old online marketing manager in Manhattan, recalled a recent non-date that had all the elegance of a keg stand (her last name is not used here to avoid professional embarrassment).

After an evening when she exchanged flirtatious glances with a bouncer at a Williamsburg nightclub, the bouncer invited her and her friends back to his apartment for whiskey and boxed macaroni and cheese. When she agreed, he gamely hoisted her over his shoulders, and, she recalled, “carried me home, my girlfriends and his bros in tow, where we danced around a tiny apartment to some MGMT and Ratatat remixes.”

She spent the night at the apartment, which kicked off a cycle of weekly hookups, invariably preceded by a Thursday night text message from him saying, ‘hey babe, what are you up to this weekend?” (It petered out after four months.)

Tomorrow we will post the second half of this article from the New York Times on The End of Courtship.  Let us know what you think in the Comment section.