The Crisis of Our Time 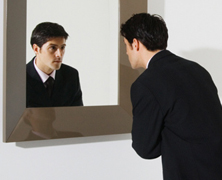 By Michael Hicks | There’s a crisis of identity in my generation, in my humble opinion. I’m not the first to point it out, but I’ve been experiencing it pretty poignantly lately. Please indulge me as I describe what I see when I look in the mirror.

We were told that we’re all special, and we’re waking up to the reality that, if everyone is special, then nobody is. The participation ribbons and soccer trophies we all won are gathering dust in boxes in our parents garages because we can’t afford a mantelpiece to display them ourselves. We were told that if we kept our heads down and paid our dues, we’d be successful, that our degrees would be like a union card; but we scratch our heads through the hairnets we have to wear as we tend grease traps, as we try to figure out why we aren’t set yet, wonder why our bosses take home four times what we do while, and ask for yet another student loan deferment. We were never told when boyhood ended and manhood began, and so we’ve decided to be ‘guys’ until we can figure it out. We were trained in how to spend other people’s money, and we learned our lessons well. Now we’re very good at a lifestyle, but we’re no good at life.

We think that, because our parents and grandparents aren’t too good at technology and are too hard on minorities or LGBT’s, their advice and collected wisdom can be discarded; the baby is thrown out with the bathwater. We see that our churches, in their attempts to be cool and play by the rules of pop culture, are losing the game; the advertising and marketing machines have a home team advantage. We don’t have the attention span to read books, and so we have no idea that the problems we’re facing are not only not exclusive to our generation, but are as ancient as man himself: Who am I? Why am I here? How shall I behave? We’ve been answered: I am an animal, born of blind processes. I’m here to reproduce, and then get as much pleasure as I can before I feed the worms and planet Earth suffers the heat death. I should go along to get along while I bide my time for my chance to get mine.

If this sounds like complaining, consider this – we were trained to assess problems so that other people could solve them for us. “The buck stops here” is something we never say. Mom and Dad, then the school administration, then the government – these are the people who solve problems. We just need to clearly articulate them. And don’t tell me that I’m wrong because who are you to say what’s right and what’s not? It may be true for you, and that’s fine if you believe it, but don’t impose your beliefs on me.

“Ok, fine,” you say. “how do we fix it?” We cultivate wisdom and virtue. We nurture our souls by feeding them the fuel they were designed to run on: Truth, Beauty, and Goodness. When do I become a man? When I am virtuous! When I am courageous, prudent, temperate, patient; when I have prudence, when I am strong. When I can stop asking, “Will these people like me?” and start asking, “Will I like these people?” When I can stop saying, “Can I crash on your couch?” and start saying “Come crash on my couch.” When I can stop asking what my country can do for me, and ask what I can do for my country. When I do the right thing because it’s the right thing.