The Beauty of the Beasts 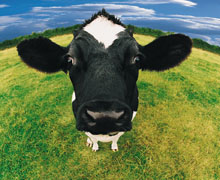 By Katherine Timpf | Yale hosts workshop teaching sensitivity to bestiality | On Saturday afternoon, Yale hosted a “sensitivity training” in which students were asked to consider topics such as bestiality, incest, and accepting money for sex.

During the workshop, entitled, “Sex: Am I Normal,” students anonymously asked and answered questions about sex using their cell phones, and viewed the responses in real time in the form of bar charts.

The session was hosted by “sexologist” Dr. Jill McDevitt, who owns a sex store called Feminique in West Chester, Pa.

Survey responses revealed that nine percent of attendees had been paid for sex, 3 percent had engaged in bestiality, and 52 percent had participated in “consensual pain” during sex, according to an article published in the Yale Daily News on Monday.

Event director Giuliana Berry ’14 told Campus Reform in an interview on Monday that the workshop was brought to campus to teach students not to automatically judge people who may have engaged in these sorts of activities, but rather to respond with “understanding” and “compassion.”

“People do engage in some of these activities that we believe only for example perverts engage in,” she said. “What the goal is is to increase compassion for people who may engage in activities that are not what you would personally consider normal.”

McDevitt referred to the range of activities discussed in the workshop as “sexual diversity.”

“It tries to get people to be more sensitive … to sexual diversity,” McDevitt told Campus Reform in an interview on Monday. “We’re not all heterosexual, able-bodied folks who have standard missionary sex.”

Several students submitted discussion topics about having incestuous sexual fantasies. Attendee Alex Saeedy ’15, told the News that he at first found this surprising, but then “thought it might be more of a psychological thing we all might have.

“I think that’s what the point of the workshop was — to bring up things we thought we so taboo and desire or urges we criticize are just regular parts of sexual psychology,” he said.

During the workshop, McDevitt taught the approximately 40 students that just because people think something is deviant does not mean that it is bad.

“It’s sensitivity training,” McDevitt told Campus Reform. “Don’t judge other people, because we all have something we are embarrassed about.”

The event was part of Yale’s Sex Weekend, which ran from Feb. 28 through March 3. Sponsors included Yale Women’s Center, Undergraduate Organizations Committee, the Sexual Harassment and Assault Response Education Center at Yale, and SeLF: The Sexual Literacy Forum.