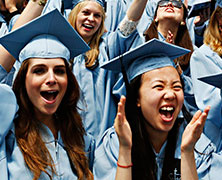 By Edward B. Fiske | There are certainly some good reasons for some people to take the U.S. News college rankings seriously. Presidents of schools that went up a notch or two can trumpet the fact to their trustees while noting modestly, of course, that “we don’t really pay them any heed.” But if you are a college-bound student or the parent of one, there are lots of reasons not to give them any credence. As a starter, and in the spirit of my editorial friends at U.S. News, here are my Top 10:

1. The U.S. News asks the wrong question. The question is not what is the “best” school by some abstract standard, but what is the best school for you. Harvard is a great place for lots of super-bright students, but if at the age of 17 you could still benefit from a bit of stroking, try Swarthmore, Carleton or Pomona.

2. They only look at inputs. U.S. News asks colleges about the resources they enjoy, including the academic quality of the students they admit. But the formula pays no attention to results. Does the college do a good job of educating its students? The rankings have no way of saying.

3. They don’t tell you anything really important. When you get to the point of actually deciding among several schools, you want to know about things like whether faculty care about teaching, how competitive the academic climate is and whether you are likely to be comfortable with the kind of students it attracts. Don’t look to the rankings for any help here.

4. The rankings are really measures of institutional wealth. By emphasizing factors such as endowment per student and faculty resources, the formula favors private schools, especially smaller ones, with big endowments. If you think that institutional wealth automatically translates into academic quality, I have a football stadium that you might like to buy.

5. They are biased against public universities. U.S. News used to have a good mix of public and private institutions in its lists of top schools, but over the years the proportion of publics, which educate more than 75 percent of college students, has declined. Are we really to believe, as the rankings released today suggest, that there are no publics among the top 20 national universities in this country. Of course, one reason for the anti-public bias is obvious (see #4).

6. Statistical differences are trivial. By listing schools in one-two-three order, U.S. News creates an illusion of precision. Even if you think that the rankings provide useful information, the actual differences between College #7 and College #19 are trivial.

7. Year-to-year changes are meaningless. It would be nice if colleges and universities could improve dramatically from one year to another, but the culture of Academe doesn’t work that way. Take California Institute of Technology, ranked #10 this year. In 1989 its ranking soared from 21st to 3rd.  Then, after cruising in 9th place for a few years it jumped to #1, but then it was back in 4th place. Does Cal Tech change its institutional spots this frequently?

8. Colleges game the system. U.S. News claims that colleges can’t improve their rankings by tactics such as getting more alumni to contribute to the Annual Fund. But this doesn’t stop colleges from trying. Within the last year, two quality schools, Claremont McKenna College and Emory University, acknowledged submitting inflated data in areas such as test scores and GPAs. Several years ago Baylor even paid entering freshmen hundreds of dollars to retake the SAT and boost their scores.

9. U.S. News also games the system. If you know that the list of top schools will be the same year after year, why buy the magazine? U.S. News tweaks the formula each year (sometimes for very good reasons). This assures churning of the rankings.

10. Who’s your Daddy? U.S. News actually does two separate things. First, it presents a huge amount of data about lots of schools, much of which can be quite useful. For example, it allows you to compare the SAT ranges or relative selectivity of a handful of schools in which you are interested. But the editors then go on to make judgments about the relative importance of each of these numbers and build these judgments into a formula.  But why should you accept the value judgments of a bunch of editors sitting in Washington, DC? You can take the numbers and devise your own rankings.

Edward B. Fiske, a former Education Editor of the New York Times, is author of the Fiske Guide to and other books on college admissions.