Studying in the School of Hard Knocks 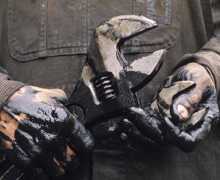 By Andrew Branch | Millennials face a challenging job market—but their own resistance to hard work may not help.

In Lifestyle two issues ago we profiled Dean Hatch, 84, who is approaching his seventh decade in the workforce. He said people can be happy at work by following a simple formula: “They should find what they enjoy doing and what they do well. Life is short and they’re only here for a limited period of time, so why not make it count wherever they are? I would encourage them to see their life as a life to be used however God leads.”

Does that apply to people 60 years younger than Hatch? Rebecca Register, now 23, thought she had found what she enjoyed and would do well: She planned to graduate from North Carolina State University and begin an Air Force career. Then a thyroid condition forced her out of ROTC, and she spent her last semester—fall 2011—at NC State working four jobs and contemplating what to do with her life.

When she looked for a full-time job she initially wasn’t worried: “I had this arrogance. … I hadn’t been turned down before.” Soon, though, she was accumulating turn-downs, and applying for jobs she had sworn she would never do. OK, maybe they’ll call me back next week, she thought. OK, maybe they’ll call me back NEXT week. Her situation is not unique. A Georgetown study found just 7.9 percent of recent college grads—about the national unemployment rate—were jobless. But an Accenture study revealed lower expectations: 41 percent of the last two years’ graduates have a job that doesn’t require a degree at all.

Struggling grads took to venting on Facebook and Twitter. Some turned to sarcasm, like sibling baby sitter Ahmed Amer: “Not even a month after graduation and I’m already an unemployed father to a pre-teen boy. Life hits hard, man. Stay in school.”

Others, like underemployed Matt Summers, “would kill for a 9-to-5, Monday-to-Friday job.” Recent college grads aren’t the only Millennials struggling. Counting all education levels, the jobless rate for 18- to 29-year-olds has been about 16 percent, including those who have given up.

But Rebecca Register is overcoming adversity. She’s earned her daily bread by serving others food at Applebee’s, and now plans to enroll in grad school to gain a master’s degree in computer science, a field with less than 4 percent unemployment. Her takeaway from the Great Recession: “It’s definitely made me reflect on what I want in life.”

The question now is: Will Register’s peers do the same? Young adults often struggle disproportionately in recessions, said Woody Catoe, a university career counselor for 10 years: “The pool of jobs is being tapped by people who are in some ways probably overqualified and under better circumstances would not even consider those kinds of jobs.” And for some recent graduates, the root of their unemployment comes from what they did—or didn’t do—during their school years.

NC State student Andrew Vargo switched to civil engineering when he discovered he liked making buildings stand. But with a GPA below 3.0, he couldn’t take advantage of many resources at the top-30 worldwide engineering schools. He didn’t get experience before he graduated in May: “Yes, I regret it, because all of the jobs I’m looking at want experience.”

Vargo isn’t alone. An increasingly educated society means a degree isn’t as valuable on its own anymore. “I’m a baby boomer,” counselor Catoe said. “When you got a college degree, it wasn’t necessarily an automatic job, but it certainly gave you more chances.” Employers today, though, want new graduates to have career-related experience: “Starting early is extremely critical.”

Many students do not start early. At NC State, only half of students worked or looked for work in October 2012. Students’ jobs and savings combined paid for only 11 percent of their higher education costs last year. Students borrowed 18 percent. The most popular library study area at the university has video game consoles and flat-screen TVs as its centerpiece. The Retreat, a brand new cottage village for students in Raleigh, boasts tanning beds, a fitness center, and a multitiered luxury pool, the largest in the city of almost 500,000.

The NC State career center is starting to see more traffic after an organized effort to inform students that they need to plan ahead. But Catoe wonders why he has to remind kids to work, and believes a work-first mindset should begin long before college. A 1978 NC State grad, John Linderman, sees problems beginning with his peers: “My generation worked hard, struggled, and wanted to make it easier for their kids. And I’m not sure that’s the right answer.”