Do we offer free college, skip college, or find another solution? 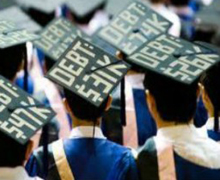 By Ben Velderman | Have you heard the one about the 115,520 janitors who have a college degree?

It’s a statistic from the U.S. Department of Labor, and it’s gotten a lot of attention as Americans are reassessing the value of a college degree against the mountain of student loan debt that’s often required to obtain one.

Either way, that’s a huge level of indebtedness that not only threatens to sink the borrower’s future, but could sink our national future. A crippling level of college debt – coupled with a lack of decent-paying jobs – is leading a growing number of young Americans to put off marriage, homeownership and parenthood.

USA Today reports, “Though hard data linking student loan debt to a delay in these financial commitments are elusive, personal finance experts say that when one is saddled with any kind of debt, economic lives can grind to a halt. The consequences of massive student loan debt – a trillion dollars and counting – could threaten the standard of living for this generation and harm the country’s economic competitiveness.”

In his new book, “Why Public Higher Education Should Be Free: How to Decrease Costs and Increase Quality at American Universities,” Samuels argues college has gotten so expensive because higher education institutions are getting involved in extravagant endeavors that have little or no relation to educating students.

Samuels offers several examples, including excessive research programs (that mostly serve as “relatively cheap” research and design departments for the government and corporations), athletics, luxury dorm facilities, and “star” professors who have little interaction with students.

The union leader recommends scrapping those programs and repurposing that money for student tuition. But that’s just the beginning of how Samuels would pay for his “free college for all” proposal, estimated to cost $130 billion annually.

“Samuels estimates that the state and federal governments could come up with $180 billion a year by better using the money they already pay to public colleges and redirecting the money they spend on student aid and lose to higher ed-related tax breaks for parents and students with mostly wealthy backgrounds.”

Samuels recommends using the leftover billions to retain some research programs and to provide financial aid to students at private and for-profit colleges, reports InsideHighEd.com

In a recent interview, Samuels admits his plan isn’t likely to appeal to most Americans, because “people no longer believe in large government programs.”

The Price Is Wrong?

If Americans aren’t interested in a socialist takeover of higher education to solve the college debt problem, they might be interested in the recommendation from conservative scholars William Bennett and David Wilezol who suggest some students would be better served by not attending college. (Bennett served as U.S. Education Secretary under President Reagan.)

In their new book – “Is College Worth It?” – Bennett and Wilezol conclude that college remains the right choice for those students who can handle the academic work and who have realistic job prospects in their chosen field of study.

If they meet those criteria, then taking on a student loan might make sense.

However, the authors suggest another course of action for the roughly 50 percent of young adults who attend college only to find themselves unemployed or underemployed four years later.

“Many young people wrongly feel that without a (four-year bachelor’s degree), they have no hope of landing a good job in the modern economy,” the duo write in a recent op-ed. “The truth is that by 2018, there will be 14 million jobs that will require more than a high school diploma but less than a bachelor’s degree. Many of these jobs pay good, middle-class wages: nurses, air traffic controllers and IT professionals.

“Additionally, America is currently facing a deficit of 3 million skilled-labor jobs – professions like welders, electricians and plumbers that earn good money and can never be shipped overseas.”

This national conversation about how to fix the nation’s higher education system is only getting started.

There will undoubtedly be other solutions offered that land somewhere between a college boycott and a government takeover.

President Obama has floated his own plan of tackling the problem, largely through rating colleges and partially linking federal student aid to the effectiveness of a student’s chosen university. Congress hasn’t acted on the president’s plan, and probably won’t for the foreseeable future.

But expect to see more plans in the coming months and years. The cost of college tuition has shot up by roughly 25 percent over the last five years, and higher education institutes will probably have to keep raising prices to pay for growing employee pension and health care costs.

But make no mistake: Americans are looking for a solution to this college conundrum. A survey taken over the summer reveals Americans value higher education, “but 62 percent said that the current system is doing only a fair or poor job of preparing college graduates for the work force,” reports InsideHigherEd.com.

It doesn’t take much of a prognosticator to realize that the university campus is destined to become the new terrain in the ongoing effort to reform and improve the nation’s beleaguered education systems.