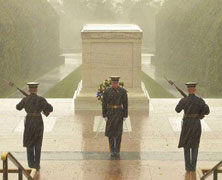 By Cato | Perhaps you’ve heard the phrase “a picture is worth a thousand words?” Indeed, a recent image that went viral on social media networks and was picked up by national news agencies has demonstrated the reality of this seemingly cliché statement.

The photo that lit up the blogosphere shows three soldiers standing guard at the Tomb of the Unknown Soldier in Arlington, Virginia. Theses “Sentinels” continued their methodical routine despite the torrents of rain, lashing wind and frigid temperature that they endured in what proved to be an historically massive storm.

The photo was actually taken during an earlier storm.  But the details of the photo are relatively unimportant – the principle represented in the photo is what matters. The purpose of this image was to underscore the commitment of our men and women in the armed services; to illicit an appropriate respect and gratitude for their steadfast action in protecting the past, present and future of American freedom.

The history behind the “Tomb of the Unknown Soldier,” and the requirements necessary for becoming a Tomb Guard, provide further warrant for such respect and gratitude.  In 1921, a marker was placed in the ground to memorialize an unknown World War I soldier. After several years, the government recognized that visitors were constantly overlooking the marker and that the marker was being defaced. The military assigned a guard to watch over the area beginning in 1948 and the U.S. Army’s 3rd Infantry Regiment has been vigilantly watching over the Tomb ever since, regardless of weather or circumstance.

The requirements for becoming a Tomb Guard are rigorous. Each Tomb Guard must be between 5’10’’ and 6’4’’ and must complete an intense training process. Below is a list of notable requirements:

After two years, they are given a wreath pin to signify their service as a Tomb Guard. If any of the rules are broken during the course of their lifetime, the Tomb Guard must relinquish the pin. The Army has awarded only 604 wreath pins to deserving individuals since the inception of the Guard.

The image of the Tomb Guards only captures one moment in time, and that moment can’t adequately convey this preparation. We’ve seen these Guards stand in the face of snowstorms, hurricanes, and pounding rain – but less recognized is the lifetime of sacrifice that they represent.

Captain Owen Koch, Commander of the 3rd Infantry Regiment, was asked by a reporter whether the Sentinels would continue their watch over the Tomb during Hurricane Sandy. “Miserable is what we sign up to do as infantrymen,” he responded. “They do it every day, in the heat of the summer and the dead of the winter. I expect we’ll be able to keep soldiers out there the whole time.”

They’ve been watching the Tomb since 1948 and they don’t plan on stopping any time soon. Hurricane Sandy has caused destruction, but it hasn’t altered the indefatigable will of the Tomb Guards who have maintained a steadfast commitment to their duty.

These Sentinels represent the American spirit.  And that’s a thing worth celebrating.