Shoveling Love to Your Neighbor’s Doorstep 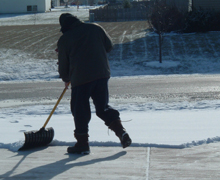 By Andree Seu Peterson | We got whacked with snow a week ago, first the soft kind (good for shoveling but bad for snowmen), then the wet kind (backbreaking for shoveling, but we got two cool snowmen out of it).

After clearing my own little piece of the American dream, I had in mind to just keep shoveling onto the neighbor’s sidewalk, preferring this somehow to the unseemly sight of an abruptly arrested snow removal job that speaks, “I am not my brother’s keeper.”

But as I started in on the neighbor’s driveway, my son said to cease and desist. He had other plans for the heavy blanket blocking their car from use: He would phone an impecunious teen he knows and alert him to a potential paying job.

The next day, my neighbor Barbara plucked her way through the snow with four cupcakes that she asked me, with profuse thanks, to give to my son for clearing her driveway. I could see her clean-shaven strip from my front door, but I had assumed the teenager had come over and done the job for pay. I said nothing about my confusion and accepted the dessert.

Barbara explained on my porch that she was especially grateful for the kindness of the shoveling job because her husband had just learned that his cancer has returned.

Later, I learned from my son that the teenager had never shown up to do the work, so my son just knocked it out himself without telling our neighbor or me.

All of which is just to share my thought with you, that very small gestures done for a neighbor may be received with appreciation far out of proportion to the degree to which we put ourselves out to do them. Also, how much better a good name and goodwill between those over our picket fence than the 10 or 15 bucks for a job done for money.