Seeking the Image: How Do Selfies Define Us? 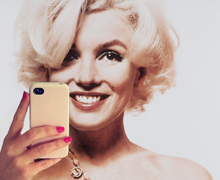 By Janie B. Cheaney | The emergence of the ‘selfie’ tells us a lot about ourselves

Last month it was revealed: The Oxford English Dictionary’s “Word of the Year” (WotY) for 2013 is selfie, referring to a self-portrait taken with a smartphone. This year’s word got some stiff competition from showroom (vb., to examine or test a product in a store before buying it online), bitcoin (n., digital currency), and twerk (a vb. we’d be happier for not encountering), but outlasted all of them.

The OED, grand master of English since 1884, uses the latest technology to trace both frequency and most likely origin of new words. The first known instance of this year’s WotY was by an Australian in 2002, who posted a picture of himself after a drunken encounter with a set of stairs: “… sorry about the focus, it was a selfie.”

Opinions about good judgment or taste don’t figure in determining the Word of the Year, though there’s plenty to be said about both—for instance, the lack of the former displayed by high-school girls sending topless selfies to less-than-trustworthy friends. And the Huffington Post, among others, got huffy about Selfies at Funerals—which is both a trend and a Tumblr page.

The origin of the word may be traceable to 2002, but the origin of the impulse is more obscure. Self-portraits were a prerogative of artists until the advent of photography, and even then they required expertise and expensive equipment. Pocket cameras made the process simpler, but the result was likely to be fish-eyed and fuzzy and couldn’t be seen until the film was developed. With a digital camera one could picture oneself over and over and discard the duds, which far outnumbered the keepers.

Smartphones, with the button on the same side as the image, make the selfie a snap. Here’s me driving to work, in my new ’do, at the beach, with the Eiffel Tower; here’s me, in short, often crowding the frame so you’ll have to take my word about where I am.

Walker Percy’s The Message in the Bottle is an examination of self-expression and self-image. In it the author asked a question I’ve wondered about ever since reading it: “Why is it that, when you are shown a group photograph in which you are present, you always (and probably covertly) seek yourself out? To see what you look like? Don’t you know what you look like?”

We know what we look like. Unlike most of humanity until the manufacture of cheap quality mirrors, we are not taken aback by our own appearance. But maybe we keep looking because we long to be surprised—by an unsuspected quality, or a hidden beauty, or some sense of location or belonging. Percy’s major theme was that man is the only creature on earth who cannot comfortably locate himself: a foreigner on his own turf, a stranger to his own face. We look to each other for clues, strike poses, and wait for feedback. The selfie permits posing on a grand scale, and every tweeted image seeks an audience among our peeps: Here’s me. How do I look? What do you think?

What does it say about a culture that enjoys images of itself so much?  Where does the selfie send our affections and priorities?  How is this practice changing us?  We need to ask these questions and seek true answers to them.  To some extent, selfies are defining us as a people.