Rules Not Just for Radicals 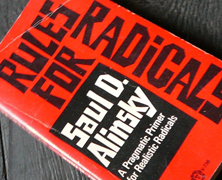 By Grant Strobl | “Change comes from power, and power comes from organization,” said Saul Alinsky in his handbook Rules for Radicals. It is no secret that the Left has nearly perfected activism, and has nearly perfected the indoctrination of young Americans across the nation. It is time for Conservatives to stop playing catch-up, and lead — controlling the dialogue on campus and out-organize the Left.

Rules for Radicals by Saul Alinsky is the activism handbook for the Left, and a genius one at that.  But, why is it a handbook just for the Left? I argue that we should use some these tactics as conservative activists and perfect them.

Let’s examine a few of Alinsky’s power tactics as outlined in his book Rules for Radicals:

·         The threat is usually more terrifying than the thing itself.

·         Maintain a constant pressure upon the opposition.

·         The price of a successful attack is a constructive alternative.

These are just a few of the points and tactics outlined in the book that the left is playing by to this day. It’s time for Conservatives to stop re-inventing the wheel; rather, we need to perfect it. Every young conservative in America should be advancing conservatism while utilizing and perfecting these tactics.   This shouldn’t be too hard considering we have the truth on our side. Using these tactics may actually make a difference on your campus, in your community, and in our nation; because if you don’t they will.

Note:  If you liked what this blog is saying, you should take Free Think U’s online course experience, Rules for (Good) Radicals.  Sign in to www.freethinku.com to learn more about this and other course experiences, which are free for students and qualify them to participate in America’s fastest-growing college scholarship fund.