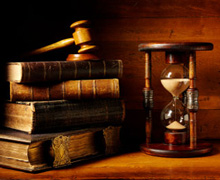 According to Pew Forum data, people who identify as atheist or agnostic account for about 4% of all respondents nationally and about 7% of respondents in the 18-29 age cohort.  Skeptics are well educated overall, claiming 8% of all post-graduate diplomas (basically doubling their base 4% share).  In the law student survey, they accounted for a whopping 28% of all respondents, more than all Protestant categories (evangelical, mainline, and traditionally African-American) combined.

Those are striking numbers. Crane argues, in fact, that the study and practice of law favor religious skeptics. It’s not altogether one-sided, of course. Religious believers’ feel for ritual may help them appreciate the ceremonial aspects of law, he says. And of course a thirst for justice is an important part of many religious traditions.

One has to wonder, though. If religious skeptics are so overrepresented among American lawyers–particularly among elite lawyers–that must have an impact on American law. The overrepresentation of skeptics would help explain why American legal institutions tend to be more indifferent and even hostile to religion than the nation as a whole, and why controversies the Supreme Court thinks it has settled continue to recur. (Ever wonder why all these school prayer cases keep coming up, notwithstanding the Court’s clear objections?) Maybe the Legal Realists had a point: Much depends on who decides.