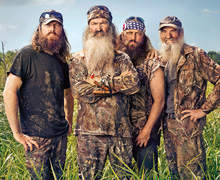 In one great episode, third son Jase gets a fine from the homeowners’ association in his fancy suburban subdivision for burning leaves and keeping chickens in his yard. Upset that the neighbors are infringing on his rights, he attends the very next HOA meeting to give them a piece of his mind, only to learn that he was in clear violation of the contract he’d signed when he purchased his toney home. The joke was on him. And his family.

In another classic episode, second son Willie — CEO of Duck Commander — gets out of an obligation to attend career day at school by shirking it off on his father, Phil, and his crazy Uncle Si. Phil’s idea of career advice is to show a group of horrified grade-schoolers how to skin a duck. Uncle Si scares the kids to death with his stories from Vietnam. It was hilarious.

The show has been funny from day one, but it took time to find an audience. When it debuted in 2010, it drew only 1.81 million viewers. When it began its second season in October 2011, it drew 3.94 million. The third season averaged 8.4 million viewers, more than double the number in season two. Not only is the show old-fashioned, but it grew the old-fashioned way as well. Not by fancy marketing or by sensational plot lines, but by word of mouth. By customer referral.

Another thing that separates this family reality show from so many others is the fact that the Robertsons are a group of people most Americans wouldn’t mind hanging out with. Like many country folks, they really know how to have fun. And without the aid of gadgets, movies, or other commercially made entertainment. The Robertsons manufacture their own entertainment.

Can you imagine spending a long weekend in the country with the Kardashians?

Or an hour with the real housewives of Atlanta, New York City, New Jersey, Orange County, Miami, or Beverly Hills?

And there is one last aspect to Duck Dynasty that has made it such a big hit: It shows Christian men and women living ordinary lives that are informed by their faith — informed by their commitment to God, and each other. These are not the dour, joyless Christians you so often see on the screen, and too often run into in life. They don’t go around quoting Scripture or heaping judgment on others; they’re too busy having fun and living good lives.

At the end of last Wednesday’s show, the clan pulled off a beautiful surprise wedding for Phil and his lovely bride, Miss Kay. They were celebrating their 49th anniversary. It was an informal scene, near a creek on the family property.

Phil and Kay’s oldest son, the pastor — who happens to be beardless, earning him the title of black sheep of the family — had this to say to the clan just moments before his parents renewed their vows: “We’ve hauled a lot of fish up this bank, we’ve played baseball under these trees, Si shot a few squirrels out of them as well, we all got baptized in the creek back here behind me, and now here we are, almost 50 years after you two got together, having the wedding you never had, with four generations of Robertsons looking on. I’d say this is the perfect spot.”

When was the last time you saw a scene like that on TV? With words like that from a pastor to his extended family?

Then came the exchange of vows, words no TV writer could have come up with. They were direct and simple and beautiful. First up was Miss Kay, who told her husband this: “From the time I was 14 years old, I loved you. We’ve been through some good times and some hard times. I loved you when we were poor and you were not so nice. Now, you are really nice. And kind. And all I can say about that is, and I’m not going anywhere. I will love you forever.”

Jep, the youngest of their boys, started to cry. He was instantly heckled by his brothers. “Keep it together,” Jase taunted him, the women laughing. And crying.

Then Phil took his turn: “Let’s see, Miss Kay, we’ve been running together since we were teenagers. The old blue Chevrolet, Si in the back. You have cooked me many a good meal. From your loins came four healthy, godly men. You are my best friend and I love you dearly, and I’m going to be with you for the long haul, till they put me in the ground. Good?”

Alan, the beardless pastor brother, then closed things out with a prayer: “Father, we thank you for this night, and we thank you for the blessing of being in this place. Thank you for Mom and Dad and their commitment to one another, and all the years they’ve served you. Father, we pray for continued blessings on our family. Amen.”

It is a prayer millions of Americans understand.

For millions upon millions of TV viewers, Duck Dynasty is the kind of funny, smart, wholesome, all-American programming we’ve been praying for.