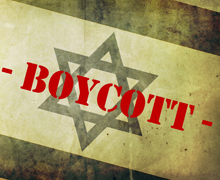 By Marvin Olasky | Not only donors practice what Charles Dickens satirized as “telescopic philanthropy.” Professors wise in their own eyes fall into it as well.

Dickens wrote of Mrs. Jellyby, a Londoner devoted day and night to the fictional “Borrioboola-Gha Venture,” a plan to settle poor Englishmen among African natives for the purpose of growing coffee. Dedicated to this project that she believes would end poverty both in England and Africa, she pays no attention to her husband or children, except for her eldest daughter Caddy, drafted to spend hour after hour sending out material about Borrioboola-Gha. Caddy has come to hate the words “Africa” and “cause.”

Monday brought an announcement by the American Studies Association that its professorial members by a ratio of more than 2-to-1 voted to boycott Israel’s academic institutions. The professed reason: Israel’s treatment of Palestinians. But the professors are modern versions of Mrs. Jellyby because even the Palestinian Authority has rejected the boycott idea. The New York Times yesterday quoted one Palestinian official saying, “We are neighbors with Israel, we have agreements with Israel, we recognize Israel, we are not asking anyone to boycott products of Israel.”

The Times also quoted Ron Dermer, Israel’s ambassador to the United States, saying on Monday, “Rather than standing up for academic freedom and human rights by boycotting countries where professors are imprisoned for their views, the A.S.A. chooses as its first ever boycott to boycott Israel, the sole democracy in the Middle East, in which academics are free to say what they want, write what they want and research what they want.” Well-said. (Disclosure: I was briefly a member of the American Studies Association after getting a Ph.D. in American Culture in 1976—and even then professors cared about academic freedom for themselves but not for anyone who opposed reflex radicalism.)

Meanwhile, donors of the Mrs. Jellyby variety continue their devotion to abstract ignorance instead of paying attention to reality. Paul Theroux, an exquisite writer who has spent a lot of time in Africa at ground level, recently wrote an excellent cover story in the business magazine Barron’s about the practice of telescopic philanthropy, which he defined as “a focus from afar to uplift the continent: New York squinting compassionately at Nairobi.”

African poverty is well worth combating, but Theroux’s arch second paragraph is sadly accurate: “Never have so many people, so many agencies, so many stratagems, so much money been deployed to improve Africa—and yet the majority of the movers are part-timers, merely dropping in, setting up a scheme in the much-mocked ‘the-safari-that-does-good’ manner, then returning to their real lives, as hard-charging businessmen, Hollywood actors, benevolent billionaires, atoning ex-politicians, MacArthur geniuses, or rock stars in funny hats. It’s not hard to imagine the future tombstones of the Clintons and Bono and Gates, and many others bitten by the eleemosynary itch, chiseled with the words, ‘Telescopic Philanthropist.’”

Others—including Dambisa Moyo in her book Dead Aid—have made similar points. Theroux lists some numbers: $50 billion in aid annually from foreign governments that Africa receives, maybe $13 billion more from private philanthropic institutions, $72 billion for Angola in oil revenues. The result: 55 African billionaires. But “I can testify that Africa is much worse off than when I first went there 50 years ago to teach English: poorer, sicker, less educated, and more badly governed. It seems that much of the aid has made things worse.”

And meddling by American academics in what they don’t understand will also make things worse in the Middle East.