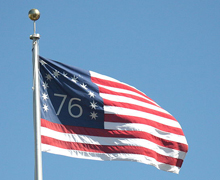 By Jerome Huyler | Millions today fear the nation is heading in the wrong direction, if not rushing headlong toward calamity. Sensing the urgent need for a dramatic “mid-course” correction, citizens should search for guidance in the doctrines that have served so many, so well, for so long.

Founding principles are fundamental.  They allow us to reach the root of our difficulties rather than just deal in mere policy details.  They make possible deep-seated, encompassing political reform.  Unfortunately, no number of readings of the founding documents will furnish any satisfactory answers to the basic queries.  Neither Jefferson’s Declaration nor the Framers’ Constitution sufficiently spells out the strict bounds of public power, the exact extent and limit of the law.  The basic questions are these: What should government do for the governed?  And what must the governed be expected to do for themselves?  When can, when must, a people say to their political leaders this far, and no farther?  How limited must limited government be?  When did the country first go off course?  And how did we get from that day to this?

Nothing so illustrates the point as much as the 2013 State of the Union Address. “What makes us exceptional,” Pres. Obama asserted, “is our allegiance to an idea articulated in a declaration made more than two centuries ago: ‘We hold these truths to be self-evident, that all men are created equal, that they are endowed by their Creator with certain unalienable rights, that among these are Life, Liberty, and the pursuit of Happiness.'”

Precisely how is this abstract principle to be applied? It’s anybody’s guess. For, “when times change, so must we,” Why is that? Because “fidelity to our founding principles [will] require new responses to new challenges; [because] preserving our individual freedoms ultimately requires collective action?” Mr. Obama once pledged to effect a fundamental transformation of our political order. And so, in the Union he envisions, the state would “harness new ideas and technology to remake our government . . . [that] is what will give real meaning to our creed.” Just how much change can a founding creed carry before it shatters into thousands of unmanageable policy pieces?

Hearing the president, one might conclude that the Declaration of Independence says whatever anyone wants it to say. But that isn’t so. Jefferson’s revolutionary manifesto clearly enunciates the precise limit of government’s “lawful” power. The needed guidance is there, but to grasp it fully one must learn to read between the lines. All other influences notwithstanding, the patriots of the Revolution, the Framers of the Constitution, the Federalists who supported, and the Antifederalists who opposed its ratification, were all committed to a set of principles nowhere more fully enunciated than in the writings of John Locke.

What kept Locke’s memory alive some 70 years after his passing?  Writing during the turbulent years leading up to England’s Glorious Revolution, Locke spoke for the part of England that prized liberty and government of, by, and for the people, and opposed the Stuart Monarchs who would rather rule by and for themselves. By 1760, a large part of that population had already settled in 13 far-off British colonies. And many believed their liberties were again in jeopardy. Locke’s Second Treatise of Government defended the idea of armed resistance against a state rife with corruption, just what the King’s colonial subjects were contemplating. Compare Locke’s language to Jefferson’s. Rebellion should not be started for “light and transient causes,” said Jefferson. For, as Locke explained, “Great mistakes in the ruling part, many wrong and inconvenient laws, and all the slips of human frailty, will be borne by the people.” But here’s Jefferson, “when a long train of abuses and usurpations,’ and, Locke, “[should] a long train of abuses, prevarications and artifices” reveal, in Jefferson’s words, a design to reduce [the people] under absolute despotism, it is their right, it is their duty to throw off such government and to provide new guards for their future security.”

But with what should the old guards be replaced? Here, too, Locke mentored the Americans. Locke imagined a time without government, a “state of nature.” But he really was describing “the state all men are naturally in, and that is, a state of perfect freedom to order their actions, and dispose of their possessions and persons, as they think fit . . . without asking leave or depending upon the will of any other man (II, §4).” Why is that? Because of certain basic commitments Locke and Jefferson shared. The Declaration thus declares, “We hold these truths to be self-evident, that all men are created equal.” For Locke, “there [is] nothing more evident than that creatures of the same species and rank, promiscuously born to all the same advantages of nature, and the use of the same faculties, should also be equal one amongst another without subordination or subjection” (II, §6).

You see, “the state of nature has a law of nature to govern it, which obliges everyone, and reason which is that law, teaches all mankind who will but consult it, that being all equal and independent, no one ought to harm another in his life, health, liberty, or possessions.” (II, 6). As men are created equal, so they are “endowed with certain “unalienable” rights. Locke designated these “Life, Liberty and Property.” Jefferson replaced property with “the Pursuit of Happiness.” All understood that happiness is not possible where there is no right to gain, keep, use, and dispose of material possessions.

What comes next is pivotal. Jefferson explains that it is “to secure these rights that government is instituted among men, deriving its just powers from the consent of the governed.” Consider all that this implies. Since the powers of government are derived from the consent of the governed, it behooves us to discern precisely what range of rights the governed possess, and so may cede to government. This means that no government may claim the power to do what the citizens did not have the right to do, in the first place. So just which of man’s rights will men willingly confer on their political institutions?

The answer will be found in exposing one additional right Locke finds in the natural make-up of man: the right of self-defense. If men could not defend their persons and possessions from being violated, in the prepolitical state of nature, in reality, they would have no rights at all. Upon establishing civil government, then, individuals do not surrender their fundamental rights. It is to better protect their lives, liberties, and possessions that they grant government the right to rule over them. The original right of self-defense is transformed into government’s power to defend all the rights of every single citizen. Citizens pledge not to take the law into their own hands, not to become vigilantes, but to rely on the rule of law and the institutions of government to prevent or justly punish any assault on men’s liberties from all threats foreign and domestic. For its part, government erects effective military, intelligence, police, judicial and correctional institutions to assure individuals the enjoyment of what is already theirs. And that it is all political leadership is authorized to do. Locke himself was plain as daylight on the point.

For nobody can transfer to another more power than he has in himself; and no Body has an absolute Arbitrary Power… over any other, to… take away the Life or Property of another… and having in the State of Nature no Arbitrary Power over the Life, Liberty or Possessions of another, but only so much as the Law of Nature gives him to the preservation of himself;… this is all he doth, or can give up to the Commonwealth… so that the Legislative can have no more than this. (XI, § 135).

No one had the right to restrain another from doing as he or she pleased or to abscond with what another earned by the sweat of his brow. Having no such right, in the state of nature, no number of organized special interests or humanitarian pleaders can affect such a transfer. Government was designed to serve as a Protector. The moment it begins acting not to protect (the interests of all), but rather to assist (some, and always at the expense of others), government transforms itself from Protector to Provider.

The Social/Corporate welfare complex and the Lockean/Jeffersonian conception of ordered liberty/laissez faire form two mutually exclusive social visions. From the founders’ perspective, the wide range of social services, business subsidies, and sundry other privileges doled out over the past two centuries constitute no lawful exercise of political power.

To champion the nation’s founding principles is to commit to a downsizing of government the likes of which can barely be imagined, in today’s climate. Who in America is prepared to handle the whole truth and nothing but . . . or commit to so radical a cause? Who on talk radio would dare hint of mounting a righteous crusade of abolition against the welfare principle, as such? Which Tea Party candidate will run for office pledging to slash his constituents’ benefits and put the civil servants in his district or state out to pasture?

It’s an open question whether any lesser course will spare the nation the calamitous consequences that eventually catch up to ill-begotten causes. But this little exercise allows the [thoughtful citizen] to more clearly appreciate: (1) just when the country first veered off the founding course; and (2) how she got from that day to this.

By Locke’s reckoning, the fateful shift came with the second bill signed into law by the nation’s first president. The Tariff Act of 1789, in addition to raising revenue, something certainly sanctioned by the Constitution, authorized Congress to “encourage domestic manufactures.” It could impose a “protective” tariff, raising the price of goods coming from Europe, inviting retaliatory measures and curtailing the trans-Atlantic trade, but not without raising consumer prices for farmers and planters and depriving many of those who made their living in the seafaring trades of their livelihoods. How did the country get from that day to this? Consider this principle:

Once a nation decides that some of its citizens have a right not to go out and get, but to sit still and be given, it finds itself torn by two questions: Just who should be given and exactly how much should they get? There’s only one answer: Politics. As the demands for benefits and privileges grow, so must the supply. There’s no limit to what citizens, in the crucible of time, may consider themselves “entitled” to. After that, it’s politics all the way down.