No Babies, No Future? 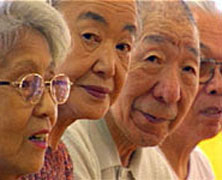 By Eric Metaxas | Taro Aso, Japan’s finance minister, has only been on the job for a month but he’s already stirred up enough controversy to last a lifetime.

In January, he made headlines around the world when he told a panel on social security reforms that the elderly should be permitted to “hurry up and die.” That is the kind of comment that both causes great offense and hits too close to home.

It hits too close to home because much of Japan’s ever-more-dire fiscal problems can be traced to the country’s demographics. But the problem lies at the beginning of life, not the end.

To put Aso’s comments in context, there are several things you need to know about Japanese demographics and its economic impact. First of all, nearly a quarter of Japan’s population is over sixty-five. That percentage is projected to rise to nearly 40 percent by 2050.

The cost of caring for its elderly is a large part of why Japan’s debt-to-GDP ratio is an astounding 229 percent, nearly 2½ times that of the United States.

The question is: How will it stop? Calling elderly patients unable to feed themselves “tube people” and saying that “the problem won’t be solved unless you let them hurry up and die” is not only offensive and cruel, it misses an important point: Japan is getting older because the Japanese have stopped having children.

The “worker to retiree ratio” measures how many people are in the workforce, stimulating the economy and paying taxes for every retired person. For the United States, a relatively young country with lots of immigrants, the ratio is about 4.5 to 1. Japan’s is 2.6 to 1 and it’s projected to be 1.2 to 1 by 2050.

There are two ways you can increase the ratio: Have more kids and/or admit more immigrants. Japan, which values homogeneity, won’t do the latter and are not doing the former: The average Japanese woman gives birth to one child at around thirty, and stops.

Japan’s fiscal-demographic trap is not the result of some law of nature—it’s the product of culture. For a host of reasons, the Japanese placed having and rearing children near the bottom of their “to do” list.

Japan is only leading the way in this regard. Nineteen countries, including Germany and South Korea, have lower fertility rates than Japan. Singapore’s rate is forty percent lower than Japan’s.

Here in the USA, our worker-to-retiree ratio is projected to be the same in 2050 as Japan’s is today.

The economic consequences of declining fertility rates are no secret. Yet, telling people they should have more children these days is only slightly less popular than urging the elderly to “hurry up and die.”

Oh, by the way, the U.S. fertility rate is now below replacement level. But of course that’s okay, because no government official here would ever say the elderly should hurry up and die. Right?