My Turn: Standing Up and Fighting the War on Christianity in America 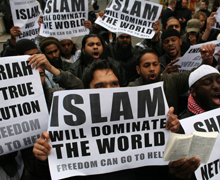 By Jean Warrick | In this country, where our Constitution calls for freedom of speech and freedom of religion, we have not experienced in our 238 years as a nation being persecuted as Christians or having religious speech silenced — until now. For 2,000 years, Christians and Jews all over the world, however, have been persecuted and murdered by millions.

Today, Christians and Jews are being murdered, beheaded, crucified, cut in two and burned alive in the Middle East, Africa, France and other countries.

Christians must remember that we still have our Constitutional rights and must not be bullied and passive but have the will and courage to stand up for what is right. The ACLU, the Freedom From Religion Foundation and extreme left activist judges are attacking small towns across the nation for displaying the Ten Commandments, allowing prayer in school or displaying Nativity scenes. We do know that these groups are in the minority, but they are having success because Christians have bought into political correctness and failed to stand up for Christian values and protection of Constitutional rights.

Cities and towns have caved in right and left because they fear paying the high cost of legal fees if they lose to the anti-religious bullies.

There is hope! Liberty Institute is the largest legal organization exclusively dedicated to defending religious liberty, and they have more than a 90 percent win rate against the ACLU and its allies in the effort to protect America’s religious heritage. They will defend monuments, memorials and religious symbols at no charge. (They do need to raise a financial war chest and currently have a $50,000 matching grant to double all online gifts given to the “Don’t Tear Me Down” campaign.)

The war on Christianity in America is being waged by Islam, also. Twenty million dollars have been poured into both Harvard and Georgetown universities to install footbaths for Muslim students and “Muslim-only” prayer rooms. There are 3,000 known Islamic mosques in America. Many other mosques are kept underground and operate in secret. Nearly all have been built in the past 12 years with billions of dollars in Saudi oil money.

So-called “Islamic Centers” in America operate with full immunity. They are, in effect, Shariah mosques that advance jihad. Often, such centers are safe-havens for terrorists, their recruitment and indoctrination. Our government knows this, but in the name of political correctness, they do nothing.

This radicalization is the result of years of the Left welcoming these extremists with open arms, especially in academia. Millions of Saudi dollars have been given to our colleges and universities in exchange for the hiring of Muslim professors.

Radical Islamist Shariah Law is not coming to America; it’s already here. Courts in 23 states have put Shariah Law over the laws in our own Constitution. Shariah Law is infiltrating our government at an alarming rate. As in Europe, there are Muslim “no-go” zones in Detroit and Dearborn, Mich., where police are afraid to enter and Shariah Law is carried out there.

The strong Communist influence in the political realm has no interest in protecting Christianity since Communism has no use for God and it endeavors to be god to the people, making the people reliant on the government rather than God.

The war and discrimination against Christianity in America will be a difficult one for Christians because of the strong grip already established by socialism in government policies, attacks by the ACLU and atheist groups, and the rapid growth of Islam in this country. A great revival and determination to stand for Christian faith and principles, family values, biblical truth and constitutional freedom together with prayer for forgiveness and healing of our land will be a step in the right direction.

My turn: Standing up and fighting the war on Christianity in America