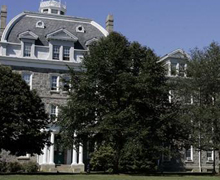 For a case study in the illiberalism that has taken over liberal arts colleges, look no further than Swarthmore. I suspect that the Quakers who founded the school in 1864—and prized tolerance above all—wouldn’t recognize the Swarthmore where I am currently a junior.

The latest upheaval has centered on the school’s radical environmentalist club, Mountain Justice, which has led a multiyear campaign calling on the college to divest its $1.5 billion endowment—one of the highest endowments-per-student in the nation—of fossil-fuel companies.

The divestment movement is national, but Swarthmore has been ahead of the curve: Before environmentalist Bill McKibben fired up students across the country last year, Swarthmoreans were staging protests. Numerous professors and the entire history department have endorsed the effort, and administrators and board members have met with Mountain Justice members 25 times over the past two years.

On May 4, the school scheduled an open board meeting on the divestment initiative so that the opinions of board members, faculty, administrators and students would receive a fair hearing. I went to the meeting to listen, and to support a friend who was planning on delivering a few remarks critical of the divestment idea. My friend never got his chance.

The board had invited two representatives from Mountain Justice to sit on a panel with them for the first half of the meeting. What the board didn’t realize was that those same students were positioning themselves to grab the microphone and disrupt the proceedings. The chairman of the Board Investment Committee, Chris Niemczewski, was in the middle of delivering the opening PowerPoint presentation—which, incidentally, estimated the cost of divestment at $200 million over 10 years—when more than 100 student protesters burst into the room, waving signs and shouting.

One of the student panelists grabbed the microphone out of turn and handed it to a line of protestors who delivered speeches that condemned the “liberal script” in the name of “radical, emancipatory change” and “institutional transformation.” Afterwards, my classmates defended their behavior because they were smashing “hegemonic power structures” and “flipping the power dynamic.”

About 10 minutes after the takeover, I stood up and reminded the protesters that other members of the college were there to hear various perspectives. But rather than listen to what I had to say, the students began to shout and clap in unison, drowning out what I was saying. Professors sat silent in the audience. Neither Dean of Students Liz Braun, nor the college president, Rebecca Chopp, spoke up.

I crossed the aisle to speak to the meeting’s moderator, but she refused to do anything. Then I appealed to Ms. Chopp, who conceded that what was unfolding was “outrageous” but said there was nothing she could do. I approached Ms. Braun as well, but she did nothing.

All of this is on video, which some classmates have posted online, exulting in the evidence of how they spoke truth to power. Meanwhile, my peers have derided me on blogs and Facebook. One accused me of “pernicious, destructive, far-reaching silencing.”

They give me far too much credit: I’m an English major who wants Swarthmore to be a place where ideas are freely exchanged. To me, overthrowing a meeting of board members, who are all alumni, is wrong and juvenile.

Apparently the college doesn’t see things that way. The day after disrupting the open board meeting, the protesters insisted on mandatory campus “teach-ins” for all students. Though it was the day before exams at a school that prides itself on its academic rigor, the administration acquiesced and endorsed the teach-ins to heal our “fractured community.”

Each attendee received a list of student “demands,” which included making courses in ethnic studies and gender and sexuality required for graduation. The activists also demanded that Swarthmore revise its judicial process so that “sexual assault cases are no longer confidential.” A refresher course in basic civility might be more useful.

After I sent several emails and a link to the video to President Chopp, she agreed to meet with me a week after the incident. Ms. Chopp conceded that the meeting was handled poorly and that the administration must do a better job of defending all of its students, not merely those with the loudest voices.

Still, I have yet to hear a public defense of our college’s policies. No administrator has condemned the takeover of the board meeting. If that tantrum doesn’t qualify as disorderly conduct and outright intimidation, what does? If moderate or conservative students—no doubt also a “marginalized” group on campus—behaved similarly, would they be held accountable?

Ms. Charette, a Robert L. Bartley fellow at the Journal in 2012, is a junior at Swarthmore College.

For this third party post in its full context including the referenced video, please go to: