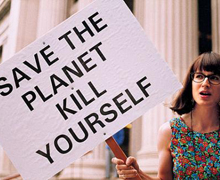 By Eric Metaxas | For decades, even centuries, we’ve been warned that overpopulation will lead to mass starvation. But the cataclysm has yet to come….

If there is ever a Hall of Fame for Pernicious Ideas, Thomas Malthus’s “An Essay on the Principle of Population” would be in the so-called charter class.

Since its publication in 1798, Malthus’s “iron law of population,” which states that population increases must of necessity outstrip food production, has been cited by a host of thinkers, most famously Mr. Charles Darwin.  Malthus’s collision between increasing population and finite resources was the engine that supposedly drove natural selection.

Well, in my lifetime “The Population Bomb” by Paul and Anne Ehrlich built on Malthus’s logic and predicted widespread starvation in the 70s and 80s on account of overpopulation.

But as it turned out, the predicted widespread starvation simply never happened.

Ultimately, what Malthus and his contemporary disciples missed was that while voles will periodically experience population crashes after out-reproducing their food supply, people aren’t voles.

This only seems obvious because you are not an environmental scientist. In their estimation, “by transforming the earth’s natural landscapes, we are undermining the very life support systems that sustain us.” As they see it, “Disaster looms as humans exceed the earth’s natural carrying capacity.”

That isn’t my summary of their view, by the way, it’s the summary of Erle C. Ellis, an environmental scientist at the University of Maryland. Writing in the New York Times, he called this view “nonsense.”

Ellis tells readers that the archaeological evidence clearly shows that even our most ancient ancestors used technology to “extract more sustenance from landscapes than would otherwise be possible.” Whether it was stone tools and fire or agriculture, the results were the same: Populations well in excess of what a strictly Malthusian calculation would have predicted were sustained.

Technologically and scientifically speaking, there is no reason to believe that things are different today. Even with a projected global population of nine billion by 2050, “There is no environmental reason for people to go hungry now or in the future.” What’s more, according to Ellis, “there is no need to use any more land to sustain humanity . . . existing technologies can boost global supplies.”

Thus, “there really is no such thing as a human carrying capacity.” If that’s the case, then why are we constantly being told the opposite? Ellis ventures that his fellow scientists are wearing blinders that cause them to see the issue in purely biological terms, which of course we know is a worldview problem.

So much of the modern scientific project is driven by a desire to diminish and denigrate humanity. We are merely the “third chimpanzee,” large-brained mammals whose impact on the planet is mostly negative.

Thus, James Lovelock, the originator of the “Gaia Hypothesis,” speaks with scarcely-disguised glee about “culling” the human “herd.”

That’s why the obvious fact that “humans are niche creators . . . [who] transform ecosystems to sustain ourselves,” does not figure into their thinking. But it should come as no surprise to Christians, who believe that, in giving man “dominion” over creation, God gave us the intelligence to “complete the work of creation, to perfect its harmony for their own good and that of their neighbors.”

In other words, we aren’t voles. Then again, to be fair to voles, they don’t come up with pernicious ideas.