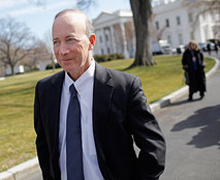 By Benno Schmidt | His skepticism about the merits of a sacrosanct liberal history textbook has sparked an overdue debate.

Most Americans would agree that academic freedom is a sacred right of the academy and crucial to the American experiment in democracy. But what is it really?

That’s the question raised by the Associated Press’s July 16 release of emails between Mitch Daniels, when he was the governor of Indiana, and his staff concerning Howard Zinn’s “A People’s History of the United States.” The emails were written in 2010 and Mr. Daniels, whose second term as governor ended this January, is now president of Purdue University in Indiana.

Published in 1980, Zinn’s “A People’s History” (the author died in 2010 at age 87) has been a staple of Advanced Placement courses at the high-school level and omnipresent in college syllabi for decades. Praised by some for focusing on American history from the ground up, the book has been condemned by others as emblematic of the biased, left-leaning, tendentious and inaccurate drivel that too often passes as definitive in American higher education.

Mr. Daniels falls squarely among the critics. Zinn’s history, the then-governor wrote in February 2010, “is a truly execrable, anti-factual piece of disinformation that misstates American history on every page.” Then Mr. Daniels asked: “Can someone assure me that it is not in use anywhere in Indiana? If it is, how do we get rid of it before any more young people are force-fed a totally false version of our history?”

Did Mr. Daniels—the future university president—violate academic freedom with his outburst? A July 22 open letter signed by 90 Purdue professors suggested as much, saying the teachers were “troubled” by his actions, in particular by his continuing to criticize Zinn’s book after taking over at the university. Demanding retaliatory funding cuts or preventing college faculty from teaching or publishing certain ideas would have amounted to such a violation. It appears Mr. Daniels, either as governor or as Purdue president, did none of these. In his emails, he aired his unhappiness with Zinn’s account of American history, but there is currently no evidence that anything was done by him or his staff to act upon his heated remarks.

Moreover, in a written response to the Purdue professors’ letter, he explained that as governor he was only concerned about the teaching of Zinn’s book in Indiana’s K-12 schools, and that he is “passionately dedicated to the freest realm of inquiry possible at Purdue.”

But what about his criticism? Do politicians or outside groups violate academic freedom when they criticize academics? Again, the answer is no.

Inquiries of this sort about teaching materials are not unusual in the life of a university president. Presidents take such inquiries seriously and follow up to make sure that the curriculum and materials are of the highest quality. Public scrutiny helps institutions fulfill their mission. It rightly keeps institutions on their toes.

Academic freedom is faculty’s freedom to teach. But, more important, it is also students’ freedom to learn. It is, as University of Wisconsin Prof. Donald Downs writes in the American Council of Trustees and Alumni guidebook, “Free to Teach, Free to Learn”: “the right to pursue the truth in scholarship and teaching, and to enjoy authority regarding such academic matters as the nature of the curriculum, [and] faculty governance.” At the same time, it is “maintaining respect for the truth (which means avoiding bias in its various forms), exercising professional and fair judgment, and maintaining professional competence.”

In other words: Academic freedom is a right and a responsibility. In recent times, the academy has too often been focused on rights and privileges rather than responsibility and accountability.

Mr. Daniels surely won’t be the last politician hoping to do something in the face of frequent imbalance and bias in the academy. And it won’t be the last time that faculty and others raise rightful concerns about inappropriate interference. That is why the recent email revelation offers not only Purdue, but the academic community at large, a long-overdue opportunity to undertake a robust self-examination of what academic freedom is—and isn’t.

Politicians can’t dictate course syllabi or reading lists in higher education. But nor should faculty be allowed to engage in indoctrination and professional irresponsibility without being held to account. And yet, over the past 50 years, that is essentially what has happened. The greatest threat to academic freedom today is not from outside the academy, but from within. Political correctness and “speech codes” that stifle debate are common on America’s campuses. The assumption seems to be that the purpose of education is to induce correct opinion rather than to search for wisdom and to liberate the mind.

If academics want to continue to enjoy the great privilege of academic freedom, they cannot forget the obligations that underline the grant of that privilege. The American Association of University Professors itself recognized those obligations in its seminal statement, the 1915 Declaration of Principles on Academic Freedom, which is today nearly forgotten: “If this profession should prove itself unwilling to purge its ranks of the incompetent and unworthy, or to prevent the freedom which it claims . . . from being used as a shelter for inefficiency, for superficiality, or for uncritical and intemperate partisanship, it is certain that the task will be performed by others.”

It’s time that college and university trustees, presidents and faculty made a concerted effort to ensure and engender a culture of academic freedom—and responsibility. If integrity is not maintained from within, the public will attempt to impose it from without. Mr. Daniels’s emails have sparked a needed debate on this defining value.