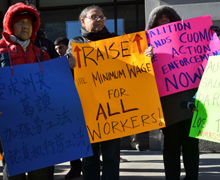 By Pierre Brochu and David A Green | On 14 January 2014 a group of 75 economists, including seven Nobel laureates, released a letter calling for an increase in the US minimum wage (Woellert 2014). At the same time, George Osborne, the Conservative Chancellor of the Exchequer in the UK, has called for the minimum wage in that country to rise by more than the rate of inflation this year (BBC 2014). In both cases, the key argument for an increase concerns a need for fairness in insuring that the lowest paid workers share in the benefits of post-recession economic growth.

Opposing arguments, of course, are based on concerns that increasing the minimum wage will reduce employment for the very people the policy is intending to help. Assessing the extent of employment effects from minimum wages is the focus of a voluminous literature that includes studies of effects in many developed countries (see Card and Krueger 1995, and Neumark and Wascher 2007 for comprehensive surveys of the literature). The debate in that literature, which has been heated at times, has centered on the question of whether increases in the minimum wage have positive or negative effects on employment.

But the American letter writers, and others assessing the literature, conclude that whether the sign is negative or positive, the impact of minimum wages on employment rates is small.

Moreover, fewer than 5% of workers in countries like Canada and the US earn the minimum wage, implying that any direct negative effects of a minimum-wage increase are unlikely to be widespread (e.g. Neumark et al. 2004).

That conclusion is reinforced by the fact that studies of minimum-wage changes on the wages of workers earning just more than the minimum tend to find little or no effect.  In addition, studies of employment effects of minimum-wage changes focus mainly on teenagers. Even for young adults (age 20 to 24), minimum-wage effects tend to be statistically insignificant and not economically substantial. Effects for older adults are so small that few papers bother to report them. Again, the conclusion is that minimum-wage hikes are directly relevant for a small subset of the workforce.

Given this, one might be forgiven for concluding that debates over the minimum wage are more about political sound and fury than about anything economically meaningful.

This latter conclusion, though, is challenged by a small set of new papers examining the impact of minimum wages on labour force turnover rates (hiring rates, quit rates, and layoff rates). The question these papers try to address is somewhat different from the large existing employment effects literature. While the latter examines whether workers are either laid off or not hired at the time of a minimum-wage increase, the point of the turnover papers is to ask whether turnover rates are different in high versus low minimum-wage regimes. The first paper examining this was a study of the effects of a 1987 increase in the Portuguese minimum wage using matched worker and firm data (Portugal and Cardoso 2006). These authors look at job separation and hiring rates for teenagers before and after the 1987 minimum wage increase, using older workers as a comparison group. They find that hiring rates were lower after 1987 than before, as one might expect. But, more strikingly, the separation rate also declined after 1987. Similarly, Dube et al.(2012) in work carried out contemporaneously with our own, used comparisons across US state borders to examine separation rates, and also found that separation rates decline after minimum-wage increases. As with Portugal and Cardoso (2006), their work focuses on impacts for teenagers and restaurant workers.

In our own work (Brochu and Green 2013), we investigate the impact of minimum wage changes on turnover rates using Canadian Labour Force Survey (LFS) data. The Canadian LFS is the monthly representative survey the primary purpose of which is to collect the data underlying official unemployment and employment rates. Its structure is comparable to both the US Current Population Survey, and the UK’s Labour Force Survey. Using it conveys three main advantages.

Using a difference-in-difference type specification that takes advantage of the time x province variation in minimum-wage changes (and making appropriate adjustments to standard errors), we find that the impact of minimum-wage increases on turnover depends strongly on job tenure.  For those with over a year of job tenure, minimum-wage changes have little impact on the probability a job ends.  However, turnover rates at the start of a job (in the first year) are substantial. A 10% increase in the minimum wage implies a 5% decrease in the probability a job terminates during the first year.

Interestingly, the size of the effect is very similar for workers in all age categories. But this is not the case for hiring rate effects.

For workers over the age of 20, the reduced separation rate is matched almost exactly by a corresponding decline in the probability an unemployed worker finds a new job. For teenagers, the latter probability declines more.

Thus, for older workers, the two effects offset one another, and there is little impact on their long-term employment rate. For teenagers, the extra reduction in hiring implies that their employment rates decline. The results are very similar for males and females.

One other surprising result is that most of the impact of minimum-wage increases in reducing job separations (approximately 2/3 of the effect) is due to a reduction in layoffs rather than quits. This is interesting new information on the way the labor market works, and could reflect firms screening applicants more carefully before hiring if they are going to be forced to pay a higher minimum wage, or it could reflect firms being less willing to lay off workers because the cost of training and retaining their replacements has increased.

The key result from a policy perspective, though, is that raising minimum wages affects newly hired, high school educated workers of all ages.

The fact that the overall employment rate for older workers changes little when the minimum wage changes has led many observers to conclude that minimum wages are simply irrelevant for these workers. Instead, we find that when the minimum wage is higher, all low educated workers face jobs that are more stable (in the sense that they are less likely to end in a lay-off) but harder to get. This shifts the debate over the usefulness of minimum wages to the question of whether workers are better off with improved job stability or improved chances of finding a job when unemployed. It also means that minimum wages affect a much larger part of the labor market than is usually recognized and potentially raises the stakes in the policy debates.

Taken together, the results for less educated workers imply that an increase in the minimum wage results in more stable jobs, but fewer of them. Thus, the policy debate should not just be about the employment rate effects of minimum wage increases but about the trade-off between good jobs with higher wages and more job stability versus easier access to jobs. And the debate is relevant for all of the low educated labor market, not just teenagers.