Merit and Preferences: Never the Twain Shall Meet 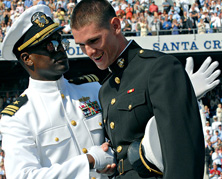 By J.A. Cauthen | A former history instructor at the Naval Academy reflects on the problems of the diversity obsession. Diversity, as commonly used by government, academia, and industry, has become so normalized that we are all expected to embrace it unquestioningly.

Exactly what do we mean by diversity? The Navy and its Naval Academy in Annapolis, the nation’s largest single conduit for generating naval officers, have arrived at this answer: Diversity initiatives will focus recruitment efforts on minorities and women in order to reflect the anticipated national demographic of mid-century.

That goal may have some merit, but the methods employed to expand diversity are problematic.

The method at the Academy, it seems, is to craft preferences for various groups based on ethnicity and gender—a policy of “affirmative action.”  During the summer of 2006, then Chief of Naval Operations Admiral Mike Mullen stated that “diversity is a strategic imperative.” His successor, Admiral Gary Roughead, codified this imperative in a Navy-wide Diversity Policy, which led to innumerable programs, outreach efforts, and new bureaucratic positions structured to increase diversity. Those actions quickly found their way to the Academy.

Unfortunately, affirmative action leads to the admission and retention of midshipmen (students) who are under-qualified or even completely unqualified, in the name of balance or fairness.  Diversity initiatives thus ensure that preferences are granted to pre-selected groups at the expense of otherwise qualified individuals. Doing so is neither neutral nor harmless.

These policies and initiatives make it impossible to reconcile preferences with merit. Preferences are arbitrarily bestowed upon favored groups, and merit becomes untenable in a system no longer defined by standards of individual achievement. Institutions governed by two or more systems lose credibility and the erosion of impartiality will inevitably weaken them.

The irony is that expanding diversity in search of greater “fairness” actually institutionalizes a system of bias. Using diversity to manufacture demographic proportionality necessarily becomes insidious and counterproductive.

As a former history instructor at the Naval Academy (from 2007-2010), I witnessed the failings of the diversity initiative first hand. The poisonous atmosphere it created among midshipmen, faculty, and staff in non-academic and academic settings was detrimental to the cohesion of the institution.  Unfortunately, once the diversity fetish is infused into an institution, it is nearly impossible to eradicate.

Changes made at the Academy in the name of diversity seemed harmless, if nonsensical, at first.   For example, the Academy’s alma mater was revised to be gender-neutral by deleting the word “men” from two stanzas.  (One wonders why students then are still called midshipmen.) That change was maddening even to some female alumni. But diversity demands ever-increasing action no matter how nonsensical.

This reckless search for the “correct” color and gender proportions manifested itself in one of the more callous examples I witnessed at the Naval Academy. The color guard, all male and mostly white, was invited to present the nation’s colors at the 2009 World Series in New York. At the last minute, the prospective color guard captain, a student of mine, was removed and replaced by a junior female member. According to the Washington Post, the motive for the change was to “make the service academy look more diverse before a national audience.”

Maybe it did, but the action was an affront to individual merit.

Diversity initiatives also tended to dilute academic expectations and standards. For instance, faculty members often had to refer midshipmen to the writing center for remedial instruction. Even with this resource, lecture and instructional time was sacrificed in order to teach basic essay writing to midshipmen. Basic writing is a skill you would assume nearly all college students (and especially those at the Naval Academy) would have learned in high school.

Bewildering as it may seem, some of my colleagues and I also had to devote a lecture period to library familiarization and usage. We discovered that many midshipmen had no idea how to navigate a library or access its resources. Fundamental reading, writing, and researching abilities should be assumed skills. When midshipmen arrived in class without those foundational skills, the academic environment suffered.

I remember well one prominent example of the problems associated with midshipmen who had been recruited and admitted under diversity initiatives.

This particular midshipman had a combined SAT score of 800: 450 math and 350 verbal.  The midshipman’s reading comprehension and writing ability were well below the university level and likely below that of high school. Not surprisingly, this student struggled all semester.

The breaking point came with the submission of a plagiarized paper. The midshipman simply Googled “French Revolution,” copied and pasted in the first link’s content, and submitted it. I failed that individual in the course, documented the transgression, and forwarded the case to Honor Board for adjudication. But the midshipman was retained.

Midshipmen-athletes are another group who are often granted preferences through special recruitment, quotas, and altered (lowered) standards.  The football team perhaps best illustrates this problem.  I discovered two football players collaborating to cheat on a quiz. I forwarded their case for adjudication, and as a courtesy I called one of the team’s officer representatives to relay the information. Expecting support, I was instead shocked when he replied with a plea to retract the case and forget about it. His justification centered about the team’s expanding list of honor violations (lying, cheating, or stealing), which stood at over a dozen cases.

I concede that midshipmen-athletes, atop their myriad responsibilities, must also account for practice and competition. The pressures are significant. Preferences and altered standards only exacerbate the likelihood that one will circumvent the rules and honor concept in order to survive. Breaking rules is one thing but treating the honor concept as if it were negotiable is another thing since honor is the foundational moral code that defines all officers.

It seems that the nation’s highest levels of military leadership have succumbed to the false promise of diversity. How much of this is politically mandated? Admitting and graduating under- or unqualified midshipmen will eventually undermine the institution and the officer corps with potentially tragic consequences, but it resonates with the political elite because diversity has become an end unto itself.

Our nation’s civilian and military leadership evidently desire a more diverse military, one that better reflects demographic currents and those to come.

What they are overlooking is that military effectiveness is predicated on discipline, professionalism, and competence. Effective leadership is based on, among other qualities, trust, confidence, fairness, and competence. Everything else, including ethnicity and gender, is, or at least ought to be, irrelevant.

Winning wars, like winning in sports, requires the best talent, irrespective of race and gender. If our military is comprised of all white males or all Hispanic females because they merit the position, so be it. But to artificially construct a military based on a desired composition simply because it reflects the nation’s changing demographics or satisfies a political fetish is egregiously foolish.