Memo to Military: Lowering Standards is Not Equality 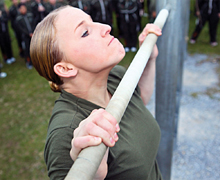 “Men and women aren’t the same. They are different,” says Bob Maginnis, a senior fellow for national security at the Family Research Council.

The Obama administration has mandated that women be allowed to join units that are involved in direct offensive ground combat by January 2016.

Maginnis, a retired U.S. Army lieutenant colonel, is also author of the book “Deadly Consequences: How Cowards Are Pushing Women into Combat.”

He tells OneNewsNow that direct ground combat is the “most physically demanding of all actions known to mankind.” 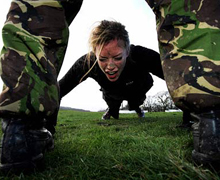 The Associated Press, working with the Rand Corporation, recently released the results of a survey that found that troops in special operations units are  concerned that political pressure will cause military leaders to cave on important training standards.

Abolishing the front-line ban might result in the lowering of the standards in what are currently male-only military occupations, critics say.

Elain Donnelly blames the so-called “Dempsey Rule,” an order from U.S. Army General Martin Dempsey that military branches must defend why they should not lower training standards to accomodate women.

Donnelly heads the Center for Military Readiness, which has documented the Pentagon’s controversial push to open up more military roles, including front-line jobs, to women.

The argument is that if training is too rigorous for women, “it’s probably too tough and ought to be changed,” she explains.

Army Times reported in March that more than 4,000 “men only” positions in special operations units will be open to women by September, the end of the 2015 fiscal year.

The U.S. Marine Corps reported earlier this month that all of the 29 women hoping to endure the intense Infantry Officer Course have dropped out. The Corps was experimenting with female Marines to integrate the IOC and, in the future, to allow females on the front lines.

“Female Marine officers who sought entry to IOC were not expected to meet the same physical fitness screening standards as male Marines,” Military.com reported, “but they were required to match male performance in the course.”

The last two women “washed out” April 2, the story reported.

“They were not able to succeed because endurance matters,” says Donnelly. “The smaller physical frame of women, it’s the inability to retain the heavy strength requirement over a period of time.”

Despite the 29 examples of women who failed to complete the course, the commandant of the Marine Corps must still tell the Pentagon how the Corps intends to offer some combat-arms jobs to women in 2016.

“We don’t need young women in these positions. We have plenty of male volunteers,” says Maginnis. “Why would we want to jeopardize the combat effectiveness of forces we depend on in order just to meet the princes of political correctness here in Washington?”

Memo to Military: Lowering Standards is Not Equality