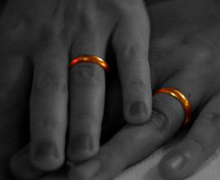 Compiled by Prof. Jack Lewis | As our society argues over the defining of marriage, it is also arguing over when to enter into that relationship as well.  The following articles consider both marrying young and waiting from differing perspectives.  Both are from Slate.com

By Julia Shaw | I got married at 23. What are the rest of you waiting for?

These days, young married couples are an anomaly. In pop culture, they usually get married at a surprise wedding: Think Andy and April in Parks and Recreation or Jessa and Thomas-John (who’s not really young) in Girls. Before the bouquet toss, viewers were counting down to the divorce episode, probably because celebrities have taught us that it won’t last. Britney Spears’ first marriage was annulled within hours, and she racked up a second divorce before age 26. At age 22, Jessica Simpson scored a reality television show about her marriage to Nick Lachey: The couple divorced three seasons (er, years) later. Is it any wonder the world scoffed at Miley Cyrus’ plan for three weddings?

And pop culture tracks reality. Only 21 percent of millennials (those ages 18-29) are married, and the median age for marriage is the highest in generations: almost 27 for women and 29 for men. By comparison, 29 percent of Generation X, 42 percent of Boomers, and 54 percent of the Silent Generation (born 1928 through 1945) were married by that age, according to a 2010 Pew Research Survey.

According to Pew, 60 percent of unmarried men and women want to tie the knot. But they just aren’t in any hurry. Marriage these days signals that you’ve figured out how to be a grown-up. You’ve played the field, backpacked Europe, and held a bartending gig to supplement an unpaid internship. You’ve “arrived,” having finished school, settled into a career path, bought a condo, figured out who you are, and found your soul mate. The fairytale wedding is your gateway into adult life. But in my experience, this idea about marriage as the end of the road is pretty misguided and means couples are missing out on a lot of the fun.

I’m a married millennial. I walked down the aisle at 23. My husband, David, was 25. We hadn’t arrived. I had a job; he, a job offer and a year left in law school. But we couldn’t buy a house or even replace the car when it died a few months into our marriage. We lived in a small basement apartment, furnished with secondhand Ikea. We did not have Internet (checking email required a trip to the local coffee shop) or reliable heat.

Marriage wasn’t something we did after we’d grown up—it was how we have grown up and grown together. We’ve endured the hardships of typical millennials: job searches, job losses, family deaths, family conflict, financial fears, and career concerns. The stability, companionship, and intimacy of marriage enabled us to overcome our challenges and develop as individuals and a couple. We learned how to be strong for one another, to comfort, to counsel, and to share our joys and not just our problems.

In 2011, my husband’s law firm collapsed. In the weeks before that, he routinely worked until midnight, plus weekends, for three different partners, none of whom seemed to be heading to the same firm. Would all this work be for nothing? Would the partners he worked for find new firms? Would he be able to come too? Would he find another legal job considering the anemic legal market? To support him through this difficult time, I would stay up late to welcome him home, no matter how late. I’d practice interviews with him. We inventoried the family budget: no more fancy coffee, dining out, Zipcars, or shopping—just student loans, rent, and food. When David had job offers with other law firms, he called me to confer.

For every troubling, vexing, perplexing question or decision, we offered each other advice, talked through the argument, and steered each other through the periods of self-doubt. When I was ready to talk myself out of applying to fellowships, he persuaded me to go for it. He was my practice audience for my first radio interview, television interview, and every major presentation. His good judgment makes it easy to share my burdens with him—and my good fortunes, too. Because your spouse knows the extent of your troubles, your successes become that much more meaningful. While I may not tell my close friends or my parents the details of a new opportunity, I don’t need to hold back with David. Being married young has afforded us unmatched companionship and support in any circumstance.

Nowadays, one’s 20s are reserved for finishing college, pursuing graduate degrees, and establishing careers. Relationships are, at best, not as interesting as a prestigious job opening at Cravath or a scholarship at Yale. At worst, relationships distract from these opportunities.

I started out thinking this way, too. When I was entering college, my philosophy was “men die, but your college degree is forever.” I imagined myself an independent, spirited sort of woman. I wrote off the girls I knew from high school in Texas who didn’t finish college or who selected their universities based on their boyfriends’ plans. Getting a “ring by spring” was nice, I supposed, but it wasn’t a grand achievement. Getting a 4.0—now we were talking.

I wasn’t anti-marriage. I thought I would get married, but it would be later after a flurry of accomplishments. When David and I started dating, his senior year and my sophomore year, I worried he would derail my education. He definitely had all the qualities I wanted in a man: intelligence, ambition, good character, plus he was a true gentleman. Still, I asked him, “You’re not asking me out because you want to get married by graduation?” This was a Christian college we went to, so my question was not out of bounds. I still regret those words. Looking back, my artificial, rigid timeline of success almost derailed my real happiness.

What I did not realize was how thoroughly marriage would jump-start our independence. On paper, our unmarried peers looked more carefree. But many of them also relied on their parents to supplement their income, drove home for long weekends and holidays, or stayed on their parents’ health insurance and cellphone plans (even though they had decent jobs!). I put David on my health insurance. We bought our own family cellphone plan and Netflix account. When we visited our parents once a year, we paid for the plane tickets and still did our own laundry. We loved our parents and siblings, but marriage made us realize that we were now a separate family unit.

Months into our marriage, my grandfather died. I was crushed. The funeral was stressful. I wasn’t able to explain to David the backstories on everyone in my extended family: He couldn’t remember who was married to whom and certainly couldn’t tell my identical twin uncles apart. Still, David comforted me, navigated the family drama, grounded me, and made me thankful for the promise of a long marriage.

Sure, being married young entailed sacrifices. We had to be particularly careful about money. David took the bar exam shortly before our first wedding anniversary. This should have warranted a lavish vacation: Most new lawyers celebrate finishing the bar exam with a trip to Europe or Asia. That was too expensive. Instead, we pricelined a hotel five subway stops away and had dinner at Pizzeria Paradiso. For the anniversary portion of the celebration, we special-ordered a cake from our favorite bakery and recounted our favorite memories from our first year of marriage.

Marriage doesn’t require a big bank account, a dazzling resumé, or a televised wedding—it requires maturity, commitment, and a desire to grow up together. My husband and I married young. We don’t have a fairytale marriage or a storybook ending because our story continues. Going forward, we anticipate new challenges and joys: children, new jobs, new hobbies, new cities, family weddings, and family funerals. There will be things we can’t predict. But one thing is for certain: We are committed to each other and we will grow through them. We don’t have the details of the later chapters, but we know who the two main characters are.

The Case Against Marrying Young

By Amanda Marcotte |  Julia Shaw, writing here at Slate yesterday has an article reinvigorating the old conservative hobbyhorse that people should marry young. Shaw herself married relatively young, at age 23 to a 25-year-old husband. Since it’s working out pretty well for her, she figures it will work out for you.

Oh, she knows that you’re going to object and point out that most young women haven’t met the right guy yet. She knows you’ll say that selecting a lifelong mate is difficult to do before you’re all fully baked adults. But you have it all backward: You can marry first with the assurance that being married makes you ready for marriage.

I grew up in one of those red states where young marriage is the norm, and we didn’t call the man you married young your “soul mate.” Our preferred term was “first husband.” There may be something to the idea that your young marriage helps you grow up, but all too often, the beneficiary of the marriage-matured person is the next spouse. It’s a tremendously stressful and expensive system, and it’s no wonder that younger generations prefer to keep those starter relationships a little less legally binding.

Shaw tries to distract from these concerns by talking up how much more cool stuff she can supposedly afford, like cellphones and plane tickets, now that she’s married. Yet she doesn’t actually indicate where these new income streams available only to the married come from. In fact, delaying marriage is associated with women making more money in the long run.

Not that any of this matters anyway. Watching conservatives desperately try to bully women into younger marriage with a couple of promises and a whole lot of threats is highly entertaining but clearly not persuasive. Women marry later because it makes sense given their own career aspirations. Even many of those pushing the ideological argument for young marriage, like Megan McArdle, tend, when it comes to their own lives, to opt out of the pressure to be young divorcees martyred for the cause. I’m glad young marriage is working out for Shaw, but for the majority of women, dating and cohabitating until they’re more sure is working out just fine. If he’s good enough to marry, he’ll still be around when you’re ready to make that leap.

For more on this issue, the New York Times recently ran this article as well: